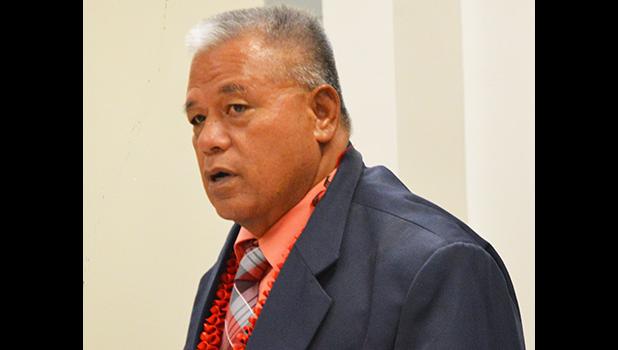 Pago Pago, AMERICAN SAMOA — Vaifanuatele Representative Lavea Fatulegaee Palepoi Mauga questioned in the House Chamber this past Monday if a person from Upolu can be appointed to take over the position of the Territorial Auditor (TA) for the American Samoa Government and requested a review of the statute.

Lavea’s comment was made after Gov. Lemanu Peleti P. Mauga presented to the Legislature last week his appointment of Tofa Sualauvi Su’a as the new territorial auditor, a position that has been vacant since 2014.

Last week during a Senate Session, Sen. Togiola T. A Tulafono, chairman of the Senate Government Operations Committee requested the Senate Legal Counsel to look into the law governing the TA position and review if Su’a’s credentials are in compliance.

Yesterday morning, Fono leaders received a communication from Gov. Lemanu informing them of his decision to withdraw his nomination of Su’a.

Lemanu stated in his letter to Fono leaders that, “I formally withdraw my nomination of Tofa Sualauvi H. Su’a as the Territorial Auditor of the Territorial Audit Office for the American Samoa Government. Mr. Tofa will continue to serve as Acting Territorial Auditor until such time another candidate is nominated. Thank you for your patience as we work towards building a Cabinet to best serve the needs of our Territory.”

Lavea’s request this past Monday was made to Speaker of the House Savali Talavou Ale, asking him to look into the law governing the TA position and review if the nominee’s credentials are in compliance. He said that the information he received is that the new TA designate “is a man/boy from Upolu.”

Lavea further stated that the position of the TA requires a certified CPA and he wanted to understand if the new TA meets this requirement.

Savali agreed and told Lavea that he never heard such language about the new TA. Lavea continued and stated that the issue was all over social media.

He clarified his statement and stated that the reason why he raised this issue was he wanted to make sure these appointees are made in compliance with the law. He said that if the law states that one of the requirements for a person to hold the TA position must be a certified CPA, then we must comply with the law.

Several faipule did not wish to voice their concern regarding this issue in the House chamber but spoke directly to Samoa News on the matter.

One faipule told Samoa News that if the law requires a CPA, then only a CPA can fill the position. He further stated that if the new TA isn’t a CPA he should not be dealing with finances and audits.

Another faipule told Samoa News that this is a very important position as it requires compliance and review of local and federal laws, government operation, intelligence and a keen mind to detect fraud and illegal practices in government operations.

Last week, the nomination of Su’a for the position of the TA reached the Fono after Gov. Lemanu submitted it to leaders of both Senate and House in a letter supporting his nomination.

According to Su’a’s resume, he was most recently Assistant Manager of Administration for the 2020 American Samoa Census Office, he was senior accountant for McDonald’s Family Restaurant, was senior accountant for the American Samoa Power Authority, General Manager of Haleck Beverages, Chief Accountant at Haleck Enterprises and a Financial Controller and Marketing Manager at Transpac Corporation.

He was also president and owner of a meat processing business, Taumafai Samoa Distributors and Atoa Meats Company.

Local statute requires that the Territorial Auditor must be a certified internal auditor holding a current certificate from any state of the United States. (Su’a’s resume does not show he is either.)

The last Territorial Auditor, Robert Dantini, left in 2014 before his contract was up. His predecessor, George Webster was fired before his term was up.