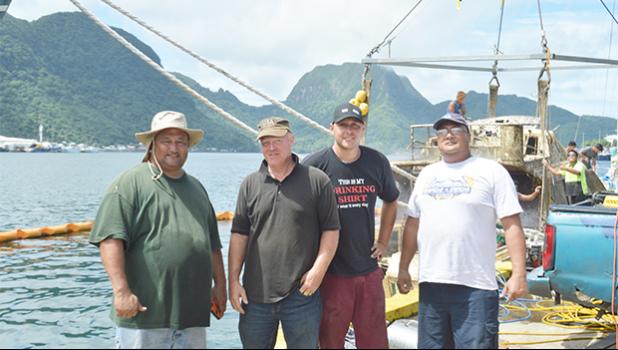 The government owned Fo'isia vessel, which sunk at the Malaloa Marina on Wednesday, May 7, 2017, was finally pulled out of the water yesterday by local businessman Iupeli Kava and the crew from P.J. Corporation.

The vessel, which cost the American Samoa Government $300K and purchased in 2009 during the Togiola Administration, was put up for sale last month during the government auction held at the Office of Property Management.

Kava, who won the bid for the vessel, didn't reveal how much he bought it for, but laughed and said, “No one wanted to buy this boat.” He shared that the low price came with special conditions that required him to pull the boat up himself.

The buyer was able to get help from another local businessman, Timothy Jones Sr. and his son, Timothy Jr., whose crane was used to carry out yesterday's job.

Kava said he's not sure what he's going to do with the boat, although maybe in 3-4 years, he can fix it up enough to use as a fishing boat or cruise boat.

The Fo'isia was to serve as a passenger vessel for the Manu'a Islands when it was purchased 8 years ago. At the time, Togiola said he hoped the vessel would be allowed to carry more than just the six passengers it was certified to carry at the time. No cargo was allowed.

The vessel was purchased through Togiola's transportation consultant, George Wray, who told Samoa News that it would be used to ferry groups of people, but would not operate on a regular schedule. But some Manu'a residents said they understood the vessel was to be used for regular transport between the Manu'a islands.