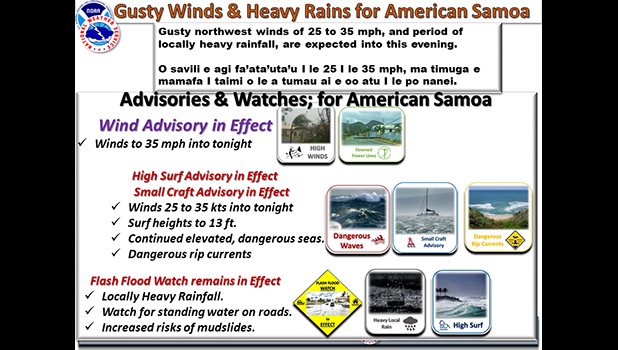 Pago Pago, AMERICAN SAMOA —Gusty northwest winds of 25 to 35 mph, and a period of locally heavy rainfall, are expected into this evening.

An active monsoonal trough will shift along the islands to continue bringing occasional showers with periods of heavy rain and embedded thunderstorms.

As grounds are saturated from   previous showers, it is likely that there will be landslides, mudslides, and flooding in flood prone areas.

A flash flood watch means that conditions may develop that lead to flash flooding. Flash flooding is a VERY DANGEROUS situation. You should monitor later forecasts and be prepared to take action should flash flood warnings be issued.