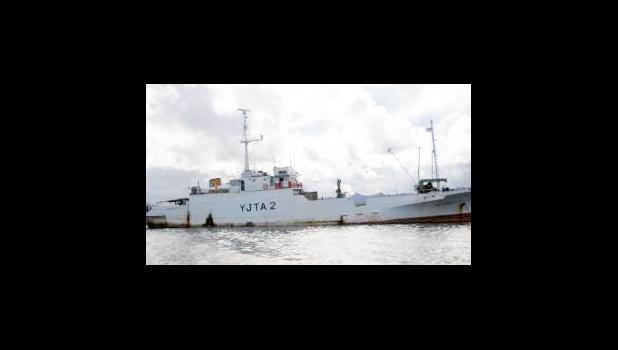 A fishing vessel company that operated in and around American Samoa was convicted and sentenced today for maintaining false and incomplete records relating to the discharge of oil and garbage, announced Acting Assistant Attorney General Jeffrey H. Wood of the Environment and Natural Resources Division and United States Attorney Channing D. Phillips. The company, Yuh Fa Fishery (Vanuatu) Co. Ltd., owned the Fishing Vessel (“F/V”) Yuh Fa No. 201 that was responsible for the pollution.

Yuh Fa Fishery (Vanuatu) Co. Ltd. admitted that its engineers failed to document the illegal dumping of oily bilge water into the waters of the South Pacific Ocean without the use of required pollution prevention equipment.

The Chief Engineer onboard the F/V Yuh Fa No. 201 acknowledged that there had been discharge of oil to the sea that caused a visible sheen upon the water and that he did not log this discharge in the vessel’s Oil Record Book, as required by law. The company also admitted that its engineers made several modifications using flexible hoses to the vessel’s piping system, which allowed oily bilge water and oil sludge to be discharged directly overboard.

The company further admitted that between June 2013 and June 2016, senior engineers regularly failed to accurately record the transfer and disposal of oil waste in the vessel’s Oil Record Book.

The vessel’s captains also failed to properly maintain a Garbage Record Book, and Yuh Fa Fishery (Vanuatu) Co. Ltd., was unable to accurately account for the storing, sorting, and disposal of garbage during the vessel’s extended fishing trips.

The Coast Guard relies on such records to determine whether vessels are illegally dumping oil and garbage at sea. As a result, tons of oil sludge, waste oil, oily bilge water, and garbage produced by the vessel remain unaccounted for.

The company pled guilty to two felony violations of the Act to Prevent Pollution from Ships, 33 U.S.C. § 1908(a), for failing to accurately maintain an Oil Record Book and a Garbage Record Book.

Under the terms of the plea agreement, the company will pay a total fine of $2.5 million, which includes a community service payment of $625,000 for use in the National Marine Sanctuary of American Samoa.

The U.S. Coast Guard personnel in American Samoa and Honolulu, Hawai’i investigated the Yuh Fa Fishery (Vanuatu) Co. Ltd case. It was prosecuted by Trial Attorney Stephen Da Ponte of the Environmental Crimes Section of the Department of Justice, and Assistant U.S. Attorney Frederick W. Yette of the U.S. Attorney's Office for the District of Columbia.