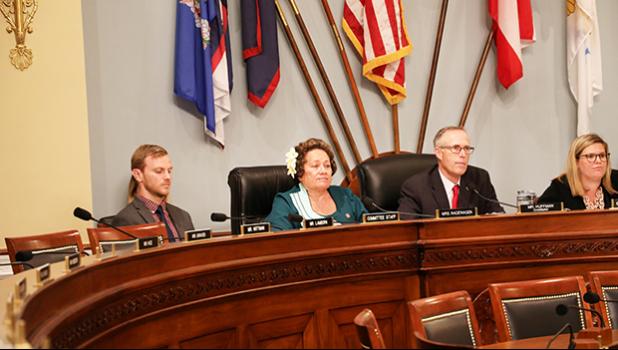 Washington, D.C. — Last week, Congresswoman Aumua Amata and the Natural Resources Committee conducted hearings and voted on a series of bills, including passage of an amendment by Rep. Amata, along with a bill affecting the Territories on which she was an original cosponsor.

The Water, Oceans and Wildlife Subcommittee held a hearing examining the condition of U.S. fisheries.

“Fishing is the backbone of our economy in American Samoa, and a part of life in the islands,” said Amata. “The health and longevity of our fisheries is an important topic, and I respect the testimony of the witnesses. I also appreciate the insight of the Western Pacific Fishery Management Council, which most directly affects American Samoa. It’s important for Congress in setting policy to understand the stewardship role of fishery management and the differences in oversight of U.S. and international vessels.”

In other action, the full Committee on Natural Resources voted on a series of bills that were introduced recently, including passage of the bipartisan H.R. 1809, on which Rep. Amata is an original cosponsor. This bill would amend the Pittman-Robertson Wildlife Restoration Act and the Dingell-Johnson Sport Fish Restoration Act, to provide parity for United States Territories, and is an effort to ensure equitable funding.

Also, in the week’s markup, Rep. Amata offered an amendment, passed by the Committee, which clarified and updated legislative language in defining the Republic of the Marshall Islands, Palau, and the Federated States of Micronesia as Freely Associated States rather than U.S. Territories.

“It’s not unusual to find a law on the books that still refers to the Freely Associated States as territories, so we need to clarify in those cases that they are sovereign nations in free association with the United States,” concluded Congresswoman Amata.