Faipule calls for strengthening drug laws with much stiffer penalties 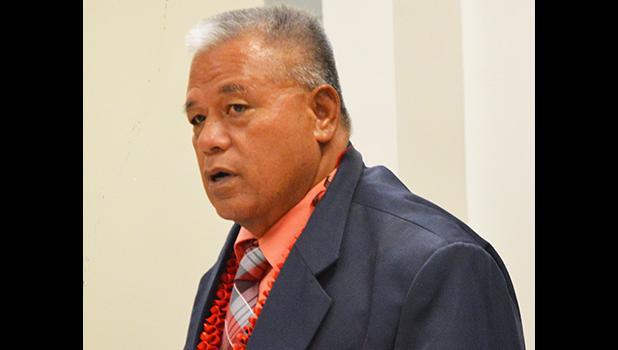 Pago Pago, AMERICAN SAMOA — A call was made in the House Chamber last week by Vaifanuatele Representative, Lavea Fatulegaee P. Mauga to amend the current drug law so that drug offenders will face more severe punishment for their crime.

According to Lavea when he raised this matter in the House last week, he noted that the current drug law is outdated and the punishment is not enough for those who repeatedly violate the local drug law.

The current law states that the crime of unlawful possession of a controlled substance is a felony punishable by a term of imprisonment of not less than five and not more than ten years, and a fine of not less than $5,000 nor more than $20,000, or both.

Lavea wants to amend the punishment to 25 years imprisonment and a fine of $50,000. He stated that the drug problem in the territory is not a joke and the Fono needs to do something to halt it. He said the only way to stop the problem from growing is to amend the law and increase the punishment.

Several faipule supported Lavea’s statement. They said a lot of people convicted for violating local drug laws go back into the community and re-offend. The reason, they say, is because the punishment is not enough.

Lavea said that he is going to introduce new legislation to amend the current drug law.

It was during a House Government Operation Committee hearing last year where the House of Representatives informed government officials who appeared to testify that one of the reasons drugs are entering our borders is that some of the Custom Office Inspectors who are assigned to search containers out in the field are not faithful to their job.

They said that they strongly believe that containers are one of ways drugs are entering our shore and the employees are not doing their job by screening and searching all the items that are prohibited from entering American Samoa.

They further stated that the government spent almost $10 million for the scanners to make sure no more drugs would enter our territory, but the problem still exists.

[Editor’s Note: Samoa News should point out the local courts have pointed to a lack of community support for drug offenders in terms of medical, social and psychiatric help, especially for first-time offenders and those who are repeat-offenders. Courts have also noted during sentencing that the lawmakers also need to take a look at the drug law and attune it to the different types of offenders — not for one law to ‘fit all’. ra]