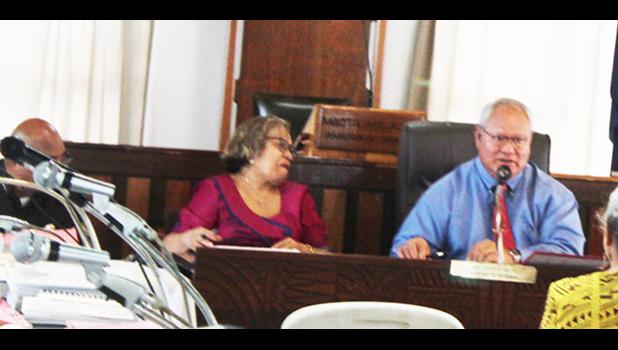 Among the handful of issues raised during the hearing had to do with new police vehicles, with at least three lawmakers saying that some of the current vehicles are ready to fall apart. Le’i responded that DPS will be receiving soon, two new vehicles for the Traffic Division through federal funding with the DPS Marine Patrol Division.

It was also mentioned that the $10 law enforcement fee imposed on every traffic violation — and collected by the court — can provide funding to purchase new vehicles, such as the new TCF van that was bought after legislation was approved by the Fono.

Sen. Logoai Siaki Logoai asked how DPS is going to pay salaries of cadets attending the current Police Academy once they graduate later this year and join the police force. Le’i said the current academy is funded with federal money from the ASG Criminal Justice Planning Agency.

The grant money — from the US Justice Department’s COPS program — will also pay salaries of the cadet-graduates for three years upon joining the police force.

DPS’ proposed budget totals $7.87 million, with $5.65 million in local revenue and $2.22 million in grants. After yesterday’s hearings, the Fono Joint Budget Committee now takes a break and will return next week Wednesday, giving time to cabinet members who are currently off island to return home and go through the budget process.

At least three cabinet members were mentioned early this week as being off island, with two of them for medical reasons.