Court rules for CCCAS in case against former General Secretary 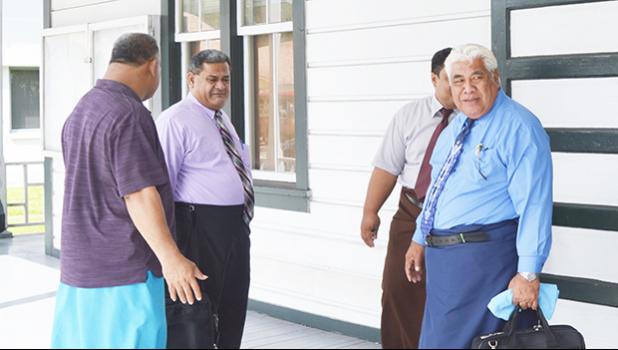 “CCCAS had the right to demand that defendant vacate the house”
By
Fili Sagapolutele
fili@samoanews.com

The Trial Division of the High Court, in a decision issued last Friday, June 23, has ruled in favor of the Congregational Christian Church of American Samoa (CCCAS), saying that they are entitled to take possession of a church home at the Kanana Fou compound that housed Rev. Amaama Tofaeono, who served as CCCAS General Secretary.

The plaintiffs — CCCAS along with Rev. Elders Eveni Mamoe, Leatulagi Faalevao, and Fiti Aofia — had filed a complaint on May 19th in court, when Tofaeono refused to vacate CCCAS housing he and his wife occupied, after his ministerial duties, including his CCCAS General Secretary post, were suspended for a certain amount of time.

The defendants named in the complaint, Tofaeono and his wife Joan Aleluia, who is also an ordained CCCAS minister, claimed that the plaintiffs lacked sufficient evidence to prove its case and the couple sought a dismissal.

A bench trial was held on May 30-31, presided over by Acting Associate Justice Elvis P. Patea and assisted by Associate Judges Suapaia E.C. Pereira and Satele Lili’o Ali’itai.

Gwen Tauiliili-Langkilde represented the plaintiffs, while Tasi Tuiteleleapaga was the legal counsel for Rev. Tofaeono and his wife.

The plaintiffs had sought to evict the defendants from the Secretary General’s house, after they failed to vacate the premises on March 31.

In its decision, the court ordered that the  judgement for possession of the house is in “favor of plaintiffs and against defendants.”

In the decision, the judges note that the Trial Division has jurisdiction over summary proceedings to recover possession of a premises. They also cited provisions of local law — “The person entitled to any premises may recover possession of the premises by summary proceedings... whenever a person holds over any premises... after the term for which the premises are demised to him.”

Additionally, judgement for repossession may not be entered if it is established that termination of the tenancy was retribution for a lawful act arising out of the tenancy.

In this CCCAS case, the judges note that the plaintiffs claim that the term for which the premises was demised to defendants ended Mar. 31 and that they gave notice to defendants to vacate by that date.

However, the defendants countered that they are still entitled to the premises as the house of the General Secretary because Rev. Tofaeono was not properly terminated from the position.

Because there is no lease governing the duration and conditions of the tenancy, and because the tenancy is dependent on Rev. Tofaeono’s employment as General Secretary, the judges point out that the court must determine his employment status with CCCAS.

According to the judges, if no employment contract exists, then an employer can terminate employment at any time as long as the decision does not violate the person’s constitutional rights.

Citing an ASG case from 1997, the judges noted that, “Generally, employment is presumed to be at-will.” Further, that presumption can be rebutted by evidence of the intent of the parties, business custom, nature of the employment and situations or circumstances of the party and case.

According to the judges, the court recognizes the defendants’ argument that Rev. Tofaeono was improperly terminated, implies that he harbored some guarantee that he would retain his General Secretary position.

Although the trial was limited to the claim of summary repossession, the judges pointed out that the “defendants not once uttered the existence of an employment contract as a basis to support their assertion that they should remain in the house because [Rev. Tofaeono] was improperly terminated from such contractual position.”

According to the judges, the full thrust of the defendants arguments of improper termination was focused on the lack of due process.

Therefore, Rev. Tofaeono’s employment “is presumed to be at-will,” the judges said, adding that as an at-will employee, he “was without contractual protection, and CCCAS could terminate him at any time and for any reason that does not violate [his] constitutional rights.”

Accordingly, the defense has not shown that Rev. Tofaeono was “improperly terminated from his positions as an ordained minister and General Secretary.”

The judges say that it’s undisputed in this case that a person is only entitled to live in the General Secretary’s house while serving this post, and living in the house ended when Rev. Tofaeono was removed from the position on March 31.

With Rev. Tofaeono’s removal from the position, the judges say “CCCAS  had the right to demand that defendant vacate the house” and that plaintiffs have established grounds for summary repossession under local law.

“Summary repossession will therefore be granted to plaintiffs,” the judges ordered.

The court didn’t make a declaration in its decision on another claim by plaintiffs for “damages for the costs of utilities and the loss of the use of the premises” against the defendants.

The plaintiffs alleged in their complaint that although the defendants were to pay for their own utilities, it was later discovered that they had charged the utilities for the house to the CCCAS, in violation of the terms of their tenancy.

See Samoa News edition tomorrow on other issues from this case.