Are you in favor of ASG opening our boarders from time to time to render assistance to people in distress? For example like the fisherman with the hook embedded in his arm or the American citizens stranded in Samoa.
Yes
51%
No
49%
Total votes: 37
Home 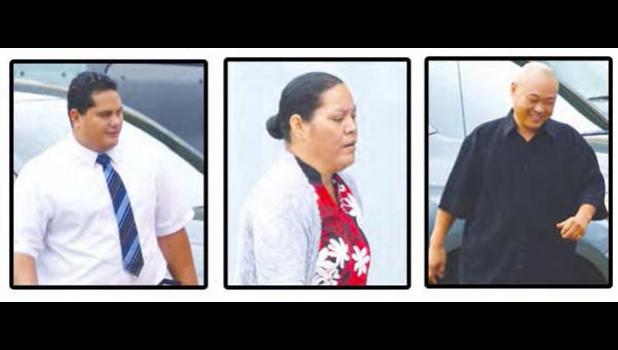 District Court Judge Fiti Sunia denied motions for bail reduction requests from two of the three defendants in the Department of Human and Social Services (DHSS) food stamp fraud case last week; and all of the defendants are scheduled to appear before the court next month for their preliminary examination hearing (PX).

Last Friday, Sunia denied a motion for Vincent Toeava and Jane Vasa, while defendant Liren Zhang, a.k.a Kevin through his private attorney, William R. Olson asked the court for a two-week continuance.

The judge has set bail at $450,000 each for Toeava and Kevin, and $10,000 for Vasa. All three are currently in custody at the Territorial Correctional Facility (TCF), unable to post bond.

PX hearings for the defendants are as follows:

Vasa, who is facing one count of criminal fraud, has been scheduled to appear in court on Friday, Feb. 2, at 10:00 a.m.

Assistant Public Defender Ryan Anderson asked the court for a continuance until this week, saying that more time is needed to deal with issues related to the case.

Anderson also asked for a bail reduction of $5,000 from $10,000 for his client, saying that the amount of money the government is alleging his client illegally received in the case is less than $5,000. Anderson said his client is not a flight risk, she has lived in American Samoa since she was born, and she also has strong families ties in the community.

Prosecutor Robert Morris opposed the motion saying Vasa’s bond was fair based on the allegations against her; and said the government believes she is a flight risk.

Vargas said the amount of bond the court has set for his client is much higher than what this type of case should be; adding his client is not being charged in a murder case.

Morris also opposed this motion, telling the court Toeava’s bond was based on the amount of money that is allegedly involved in this case; and the defendant is a flight risk.

Responding, Vargas told the court that what the cade the government has filed in court is just allegations, and his client has never admitted wrongdoing to the police.

If the court denies his motion, he said, Toeava will continue to be incarcerated for up to two years awaiting his fair jury trial hearing. And if he is found not guilty, the government will never be able to pay back all the time he has spent in prison, and that’s why he truly believes that $50,000 is a reasonable bond for his client.

In his reply Sunia first pointed out that in terms of a bond hearing for a defendant, our local Constitution states that a defendant has no rights to a bond hearing; and said this is the first time the court has come across a motion like this —an evidentiary hearing to reduce a bond.

Sunia then told Vargas that his client is facing 19 class C felony charges, which can take the maximum imprisonment terms of up to 193 years in jail; and seemingly compared the terms to a first-degree murder sentence of an imprisonment term of up to life or the death penalty.

As to the amount of money that is allegedly involved in this case, the District Court judge pointed out that the fine for all the criminal counts against his client could be up to $386,000.

“Bear in mind that every single charge against your client is an allegation, and all of these things go together to a determination that the defendant is a flight risk,” Sunia said, before he denied a reduction of bail, saying the current amount is reasonable.

For Zhang’s (Kevin) case, his private attorney asked the court for a two-week continuance, because he needs more time to deal with issues related to the case. Sunia acknowledged that the defendant has agreed to waive his right for a speedy PX and granted the continuance.

THREAT TO THIS REPORTER

Last week, outside of the court house before the hearing started, a woman in her early 50s, who might be related to one of the three defendants, confronted this Samoa News reporter, and asked why Samoa News had printed the story about the DHSS fraud case on its front page.

She yelled at this reporter, in Samoan, saying, “Hey you — dog face — before you print anything in your paper, make sure get your facts straight! All the information that was printed on your front page about my relative was wrong.

“Why don’t you go and do something good to earn money to feed your children, instead of coming here and collecting the wrong information to mislead the public.

“If I see a picture of my relative in your newspaper next week (this week), then you know what is going to happen to you!”

Responding to the demands of the public to Samoa News, we have published the photos of the defendants to go with this story.