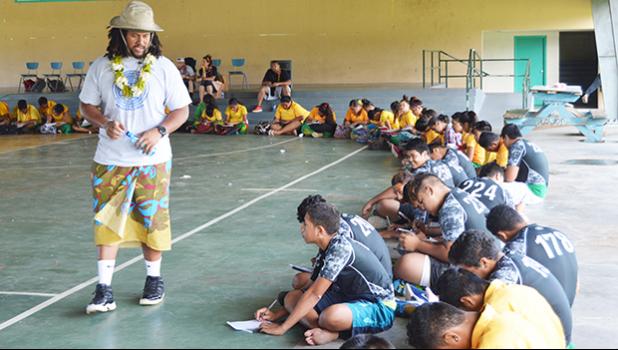 Before departing the territory Monday night, Jeremiah Masoli extended sincere appreciation and many thanks for the support from the local community during the weeklong literacy workshops and athletic clinics at public high schools. He was also very thankful to the Department of Youth and Women’s Affairs, who coordinated their work, as well as the support from the Department of Education.

Masoli, whose parents are from American Samoa, and is a quarterback for the Hamilton Tiger-Cats of the Canadian Football League, had teamed up with the San Francisco-based non-profit group CASEProject for a series of American football camps and community projects in American Samoa.

“The whole focus of our team visit is to offer our assistance to local students, to encourage them in not only academics but sports such as football while in school,” Masoli told Samoa News on Monday at Leone High School, their last stop before leaving Monday night, before a farewell dinner hosted by DYWA.

“Our team is happy to witness the many students as well as teachers who turned out during the workshops and clinics and this is an encouraging sign for us to return next year,” said Masoli, a former quarterback with the University of Oregon football team.

At the Leone High School clinic, Masoli reminded students the importance of setting goals in their lives as they are depended on in the future by their family, village, church and American Samoa as a whole.

DYWA director, Jonathan Fanene, who retired from professional football with the National Football League (NFL), was present at the Leone campus along with his staff. Fanene says he is pleased to see athletes of Samoan ancestry returning home to give back to the community through these types of workshops and sports clinics. And he says DYWA will continue to play a role in coordinating such activities in the future.

Among the retired NFL players who have returned to give back to the community in the past is Troy Polamalu.