Can tattoos make you healthier? 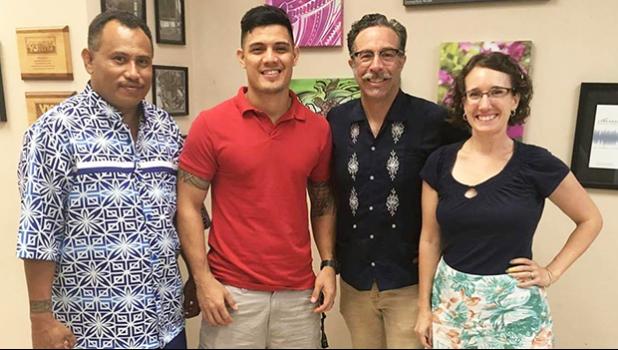 A local study is looking at possible link between tattoos and a robust immune system. In other words, can tattoos make you healthier? This is a question that a current study being conducted in the territory aims to answer.

Dr. Michaela Howells, an Assistant Professor of Anthropology at the University of North Carolina, Wilmington, along with Dr. Christopher D. Lynn, Associate Professor and Director of Evolutionary Studies at the University of Alabama's College of Arts and Sciences (Department of Anthropology) are in the territory spearheading a study that could prove the common Samoan belief that tattooing a certain area of the body helps alleviate things like gout and arthritis.

"Getting a tattoo involves an attack on the skin," said Dr. Howells in an interview with Samoa News last Friday. "When a person gets a tattoo, their immune system immediately goes to work because the skin is being attacked."

According to her, a small study conducted by Dr. Lynn did prove that the immune system for those who get tattooed is stronger than those without any ink work. The goal now is to conduct the same study in American Samoa. The results of Dr. Lynn's initial study was shared by over 300 news networks across the country "so this is something that we take very seriously," Dr. Howells said.

Tattoo, down to the word itself, is said to be something that originated in the Samoan Islands. It is believed that the word tattoo came from the Samoan word "tatau" and to this day, thousands of years after legend says two girls arrived on the shores of a village in Savaii armed with tools to carry out the job, the tradition continues.

Young men and women are still getting the traditional pe'a and malu, quite often looked at as a 'rite of passage' solidifying ones journey into adulthood and his/her decision to 'serve' and eventually 'lead'.

In addition to the traditional tatau, young people have opted to get more modern body art, like sleeves and leg pieces that incorporate tribal designs and Samoan motif.

Tattooing is a huge part of the Samoan culture. And that's exactly what Dr. Howells believes. According to her, the research she and Dr. Lynn are conducting has to do with 'learning' more about the Samoan culture and eventually 'sharing' it with the world.

Dr. Howells first came to the territory in 2010 and has been all over the world studying things from chimpanzees to prenatal care and most recently, the Zika outbreak. "I love the Samoan culture," she shared.

Her partner, Dr. Lynn, says he started getting tattooed in 1987 when he was a high school student in Indiana. In college, he took an anthropology course in body modification and became much more fascinated by tattooing practices cross-culturally.

"I remember reading an article then with a quote from the famous tattoo artist Lyle Tuttle, who had been tattooed all over the world, including Samoa, who said, 'Tattooing has always been associated with warriors; it's possible that early man figured out that men who were tattooed had a better survival rate from wounds, because a tattoo is a wound - maybe it develops the antibody system.' That always stayed with me, and I wondered if it had ever been studied," Dr. Lynn told Samoa News yesterday.

He continued, "With only a few exceptions, the only biological studies of tattooing that have been conducted has focused on negative things like dermatological issues associated with tattooing or associations between tattooing and drug/alcohol use or teen pregnancy. There are so many things we don't know about the biological impacts and possible benefits of tattooing."

Dr. Lynn, earlier this year, put out a book and authored a chapter summarizing the biological benefits of tattooing in the Southeast U.S., based on a study by him and one of his students, and compared aspects of it to football.

The initial study was conducted in Alabama using a small group of mostly women.

"We found that having lots of tattoo experience seems to stimulate a 'priming' or habituation effect in the immune system," Dr. Lynn said. "We got a lot of press nationally for that research, which is wonderful, but the study really needs to be validated in a bigger sample with people who get more tattoos and where there are more demands on people's immune systems."

Last year, Dr. Howells invited Dr. Lynn to American Samoa to work with her on a study of prenatal care, women's health, and Zika, That was when Dr. Lynn had the opportunity to see how much tattooing is still practiced here.

"I already knew a fair amount about Samoan tattooing from the anthropology course I had taken, but there is so much more to learn about the cultural importance and practice of Samoan tattooing. It's really exciting," he said.

"We know tattooing has been practiced for thousands of years around the world, but Polynesia is among the few places it wasn't eradicated by colonialism and still maintains many of its traditional aspects," he continued.

"Our goal is to repeat our previous study here on the island with a larger sample of more people with lots of tattoo experience and where there are greater environmental health risks. We are also paying more attention to the intersection of Samoan tattoo traditions and the impacts of globalization."

Dr. Lynn concluded, "Since tattooing hurts and is basically a wound, it might have health benefits. So I often compare it to exercise. When a person is out of shape and starts going to the gym, the first time they go they are tired, sore, and may even feel run down afterward. Which is how it can feel to get a tattoo. But after a person gets into the habit of working out, their body recovers more quickly, they heal faster, and they begin to feel healthier and have better immune response. We think the same thing is happening with tattooing.

“Tattoos are culturally moderated stressors that the body habituates to. Tattooing has been practiced for thousands of years for a variety of reasons. We might also compare tattooing to vaccinations. In fact, they have found vaccinating people using tattooing guns (without ink) may be more effective in some cases than injecting them, for the reasons I've suggested,” she said.

Being part of the local study is strictly voluntary. Dr. Howells and Dr. Lynn, with the help of Chris Ausage of the American Samoa Historic Preservation Office (ASHOP), have teamed up with local tattoo artist Joseph Iosefa of Off Da Rock Tattoos in Avau to help get things moving.

Iosefa has agreed to offer huge discounts on tattoo work for anyone who wants to be part of the study which is ongoing from now until July 28, after which the researchers will depart the territory.

Volunteer test subjects will only need to provide a spit sample before and after they get tattooed.

The study is approved by the LBJ Institutional Review Board and appointments can be made by calling 252-8384.