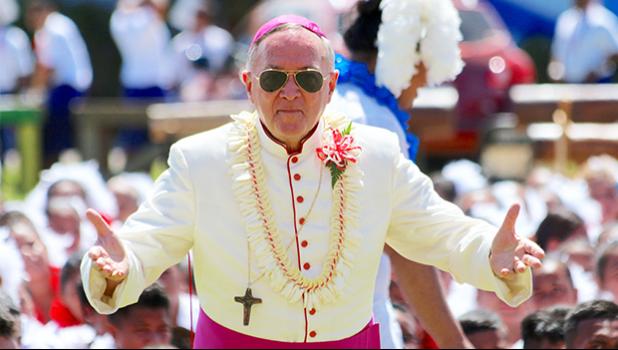 Bishop Peter Brown, head of the Diocese of Samoa Pago Pago, has offered the Catholic Church’s support in the government’s fight to rid American Samoa of illegal drugs.

As Bishop and leader of the Catholic community in American Samoa, Brown says that he commends and offers support for the recent initiatives published in the media “to address a growing critical illicit drug problem for our community especially our youth.”

In a memo to police officers earlier this month, Police Commissioner Le’i Sonny Thompson said the Governor established this year a Task Force for Domestic Security to formulate mitigating strategies to curb and eliminate the plague of illicit drugs and narcotics that has plagued the daily lives of the community.

To be successful, he said, police call for a united and coordinated effort with the Office of Samoan Affairs to partner with grassroots community organizations, faith based and non-governmental organizations to stand united with the law enforcement community to eliminate the systemic threat that drugs and narcotics impose on children and the family.

In his letter, Bishop Brown noted that the task force has been established “to formulate strategies to remove this scourge in our community.”

“As an organization deeply involved in the spiritual and community care of people in American Samoa we are fully supportive of this initiative taken by the Government,” Bishop Brown wrote. “Also with 18 parishes and five schools on island we are very much aware of the proliferation of illicit drugs available to our young people today.”

Through his letter, Bishop Brown is offering “any assistance to the Task Force that we can provide or may be of use in establishing a meaningful response to this important community issue in American Samoa.”

“I suggest also a combined churches approach in that they are located within our villages close to our young people,” he concluded.

During the 25th Police Academy graduation ceremony on June 9, there was a call for unity in the community from the Governor, Mauga and Samana, to fight the drug problem in the territory.

Samana, who told the audience that his brother died as a result of drugs, said “Sons, daughters, brothers, sisters who are taking drugs — they are victims.”

He said the “people that we need to get, are those who sell the drugs, those who are making the drugs. Those are the folks we need to concentrate on.”

At a cabinet meeting two weeks ago, Lolo stressed that the protection of the community “is everyone’s business” and urged all cabinet directors to be part of the solution. He also suggested that a meeting be held at the end of every quarter, for the task force to sit down and review police performance and make necessary recommendations to the Police Commissioner.