ASG and Amata file a motion to intervene in Citizenship lawsuit 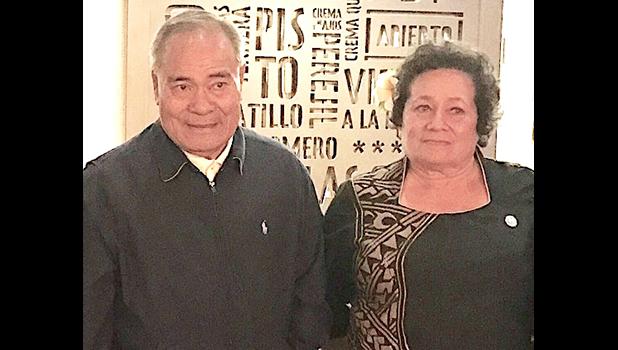 Pago Pago, AMERICAN SAMOA — The American Samoa Government and Congresswoman Aumua Amata have asked a federal court in Salt Lake City, Utah to allow them to intervene in a citizenship lawsuit filed there by three people who were born in American Samoa.

The plaintiffs — John Fitisemanu, Pale Tuli and Rosavita Tuli — argue, among other things, that because they were born in American Samoa, a US territory, they are entitled to citizenship under the 14th Amendment, the Citizenship clause — of the US Constitution.

Defendants in the case include the US government and US State Department officials.

Last Friday, ASG and Congresswoman Amata filed their motion to intervene in proceedings under Federal Rule of Civil Procedure 24(a) or, in the alternative, for permissive intervention under Rule 24(b), according to court documents.

Attorneys for ASG and the Congresswoman note that they conferred with counsel for the existing parties and defendants do not object to this motion to intervene but plaintiffs did not consent.

They also pointed to an identical case that went all the way to the US Supreme Court,that the justices declined to hear. This is the case in which local resident, Leneuaoti Tuaua was the lead plaintiff, and it was initially filed at the federal court in Washington D.C.

“Despite the fact that the Supreme Court denied certiorari in a virtually identical case less than two years ago, three U.S. nationals from American Samoa and a nonprofit organization ask that this Court revisit the question, forge an unprecedented path, and unilaterally declare that the  Citizenship Clause of the Fourteenth Amendment applies to all persons born in American Samoa,” according to the motion by attorneys for ASG and the Congresswoman.

They argue that such a decision would fundamentally alter the status of both the people and the unincorporated territory of American Samoa.

“This case thus poses a question of exceptional importance to the people of American Samoa, and the movants (ASG and Amata) have a direct and substantial interest in this litigation that may be impaired and is not adequately represented by the current parties,” they argue.

“It would also impair and impede the movants’ interests in the question of Samoan citizenship, the democratic prerogatives of the American Samoan people, and the preservation of the fa’aSamoa,” they argue.

“Likewise, plaintiffs seek to undermine Congresswoman Amata’s role as advisor to the U.S. Congress on the important question of Samoan citizenship, nullify her ability to guide legislation through the US House of Representatives on the subject of Samoan citizenship,  preclude her from choosing U.S. national status in the future, and may jeopardize her matai standing as Aumua.”

The motion recalled part of the decision by the D.C. Circuit Court in the Tuaua case, saying that “to impose citizenship by judicial fiat” would require the Court to “override the democratic prerogatives of the American Samoan people themselves”.

“And although the U.S. defendants have taken the legal position that the movants advocate, they have no particular interest in protecting the traditional way of life in American Samoa or preserving the fa’a Samoa,” the motion states.

It also states that as the Territory’s democratically elected representatives, ASG and Congresswoman Amata “are best situated to represent the concerns of the people of American Samoa on this matter of exceptional importance.”

There is no indication as to when the court will rule on the motion to intervene.

ASG and the Congresswoman are represented by Utah based law firm Manning, Curtis Bradshaw & Brednar and Washington D.C. law firm, Kirkland & Ellis LLP — which also represented ASG and Amata during the Tuaua case.