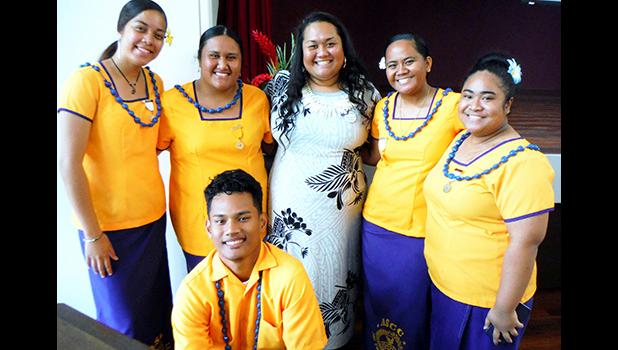 Established in 1918 by two-year college presidents in Missouri, the PTK recognizes outstanding academic achievement and provides opportunities for individual growth and development through honors, leadership and service programming. Since its inception, PTK has grown into the largest honor society in American education, with more than two million members and 1,200 chapters throughout the United States and its Territories, as well as Canada and Germany.

As a part of campus life at ASCC since 1979, the Alpha Epsilon Mu Chapter of the PTK has long counted among its members many of the highest-achieving students at the College. Those who accept the invitation to join receive benefits, which include exclusive scholarship opportunities, access to the PTK database, and the prestige that comes with being a member of an organization recognized by the American Association of Community Colleges as the official honor society for two-year colleges throughout the USA.

Each semester, the PTK holds an induction ceremony for its new members featuring a distinguished speaker from the community to share his/her insights and encouragement with the students entering the society.

For last week’s ceremony, the PTK welcomed as keynote speaker Tonya Tuigamala, an alumnus of both PTK and ASCC who now works for the Department of Education. As a youth who lived in both American Samoa and Hawai’i, Tuigamala attended Manulele Elementary School, Nanaikapono Elementary School, Nanakuli Intermediate and High School, and finally Tafuna High School, where she graduated in 2009. She enrolled at ASCC the same year, majoring in elementary education, and joined the PTK in 2010.

Tuigamala has actually graduated from ASCC twice, first with an Associate of Arts in Education in fall 2011, and again in 2013 with a Bachelors degree in Elementary Education from the Teacher Education Department. After earning her Bachelors degree, she was hired as an English tutor at the ASCC Student Learning and Assistance center, and found a passion in working with students with disabilities. This led to Tuigamala’s next position with the Department of Education as a special education teacher. While with DOE, Tuigamala also pursued a Master of Arts degree in Teacher Leadership with Walden University, and today she works as a Special Education Resource Specialist for Tutuila’s private schools, as well as an adjunct instructor with the ASCC Teacher Education Program.

For her keynote speech, Tuigamala discussed the idea of the scholar as not only someone in academia as a teacher or a student, but as anyone who pursues knowledge for the sake of knowledge.

She used the example of Steve Jobs as an everyday person whose pursuit of knowledge changed our world.

“Each of you is on this stage today because you have come to exemplify some of the qualities of scholars,” Tuigamala advised the new PTK members. “You are excellent students. You accept the fact that the purpose of school is to help you pursue knowledge. You don’t always know where that knowledge will take you, but you know that you’ll need it to help you define your future. One of you sitting here might be the next Steve Jobs. Perhaps you’ll give the next great speech or write the next great book. Perhaps YOU will inspire countless others to engage in scholarship just like you.”

For more information on the nationwide PTK activities, visit www.ptk.org.