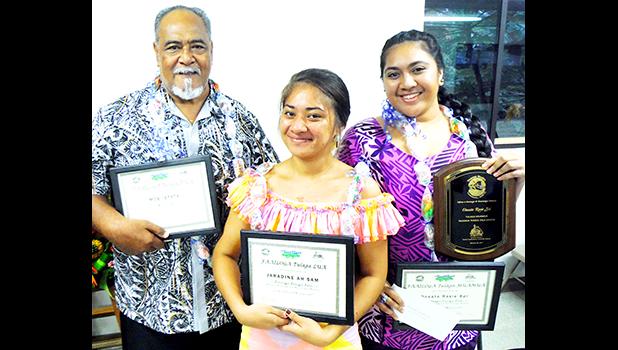 Now in its third year, and open to all ASCC students, the writing competition attracted 33 submissions this time. Ms. Soi, who won third place in the 2016 competition, this time took top honors with her story “O le ‘Olomatua,” which looks at the iron fist rule of a feisty Samoan matriarch and how her grandchild inspires forgiveness and unity.

Ms. Ah Sam won second place with “E ui ina avea ma i‘a ae lē ‘uma le alofa”, in which she successfully weaves a fisherman’s story around a legend, and Mr. Iefata came in third with “E fai i le loto”, a powerful testimony about Samoan identity and getting a tatau for a person raised off island.

“Through the writing competition, we try to create more awareness of Samoan way of life by offering a platform for local voices to share their stories and their creativity,” said SSI Director Okenaisa Fauolo-Manila. “Writers must keep developing their craft so they can share their stories in a more powerful way. We’ve noticed some general improvements in the writing submitted for the competition compared to last year, but we still have a lot of fine-tuning to help with. We also take it to heart that a great concern was noted in a past UNESCO survey about what they term a famine in writing and fiction ‘in the vernacular,’ referring to Pacific languages, including Samoan. The SSI hopes to fill this niche and create more awareness by encouraging students to write as well as providing opportunities for them to read their stories on our Faasamoa Pea radio program, if they feel comfortable doing so.”

The writing competition aligns with the ASCC mission to promote awareness of Samoa and the Pacific, a goal also perpetuated by the SSI. To this effect, the SSI also researches local narratives and legends, and then offers these stories in both English and Samoan to meet the growing interest and needs of a non-Samoan speaking audience or those who need translations.

The same literature is utilized by classes such as SAM 151 (Freshman Samoan & Lab), SAM 154 (Intro to Samoan Literature) and Sam 271 (Samoan Creative Writing). Students in these classes are regularly assigned with writing critiques of competition stories and others aired on the radio program, and this work is included as part of each student’s class achievement assessment.

At the ceremony to recognize the competition winners, ASCC’s Director of Physical Facilities Maintenance Fata Lokeni Lokeni, who is also a family member of Ms. Ah Sam, spoke on behalf of the parents and guests to commend the SSI for their continuous efforts to promote the second pillar of Samoan identity –the Samoan language, not only through the work of students, but also through their many additional activities.

Reflecting on winning first place this year, Oneata Rosie Soi looks forward to doing more writing in the future. “Although I have a passion for writing, winning the first prize was unexpected,” she said. “I give God the glory for it. It makes me want to encourage other students to keep writing. Ultimately, I want to see my name on a book, so I’m going to learn and get as much help possible to achieve this.”

The SSI’s weekly program Faasamoa Pea is broadcast every Saturday morning from 9:00 to 9:15 a.m. on local radio station KSBS-FM 92.1.  Stories that the SSI consider as appropriate and relevant for the general public, especially children, are shared on-air under the guidance of SSI faculty and Faasamoa Pea host Alofa Nuusila.

For more information on the Samoan Studies Institute, see the ASCC Catalog, available online at www.amsamoa.edu, or call the SSI at 699-9156, extension 347. The SSI expresses their gratitude to KSBS-FM 92.1 for their support of the program Faasamoa Pea.