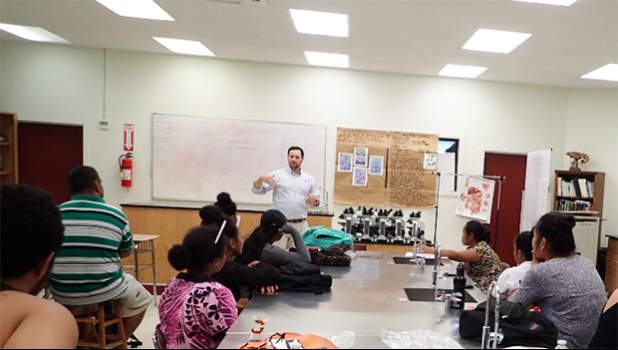 It isn’t often that a high level official such as the Director of the National Oceanic and Atmospheric Administration (NOAA) Office of the National Marine Sanctuaries (ONMS) travels to American Samoa and makes time to speak with college students.

Armor spoke about how he fell in love with the ocean at a young age, and how he persevered throughout his career to ultimately end up where he is today, as the Director of the entire National Marine Sanctuary program.

He recounted the hard work he put into seeking out opportunities in his field of interest, and how important it is to not be discouraged if you aren’t accepted to your first, second, or even third attempts to get a job or an internship.

Armor shared how his first marine internship after college was working with an outreach camp at Sea World in Orlando, Florida, and how this wasn’t his first choice, but still allowed him to get his foot in the door and find better opportunities later on.

The ONMS director emphasized that this life lesson isn’t only for marine fields, but any area that students may be interested in, and offered three pieces of advice: 1) be flexible, 2) take advantage of opportunities, and 3) don’t be afraid to take risks.

The students had many questions for Armor, and were excited to learn about the amazing marine resources we have here in American Samoa, from the largest coral in the world off of Ta’u to the longest continuously monitored coral reef transect in Aua, and the NOAA observatory station in Tula, where they monitor the “cleanest air in the world.”

Those interested in learning more about the ASCC Marine Science Program or ACNR can contact Kelley Anderson Tagarino at 699-3353 (office) or 258-2967 (cell) or at KelleyAT@Hawaii.edu on email, or via post mail at P.O. Box 2609 for more information.