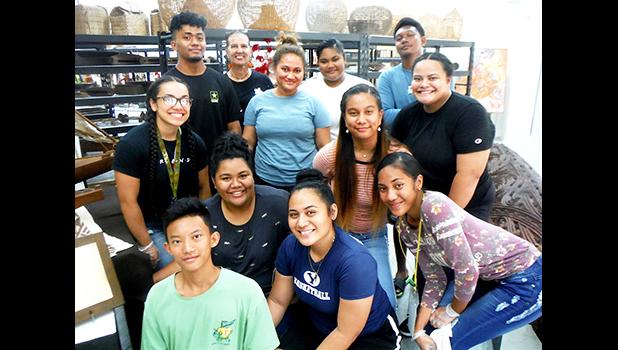 Pago Pago, AMERICAN SAMOA — Twenty students in Fine Arts classes at the American Samoa Community College (ASCC) received rare opportunities this semester to gain a perspective on different approaches to what might be termed “cultural documentation” by participating in special public activities.

First, they spent several days helping to prepare the newly renovated Jean P. Haydon Museum for its re-opening in late August, and several weeks later they participated in a Filmmakers Convening workshop hosted by Pacific Islanders in Communication, a training and funding organization that seeks to promote filmmaking in the American Pacific.

The students came from the classes Art History Survey I (ART 150), Design Fundamentals (ART 160), and Art Forms of Samoa and the Pacific (ART161), all taught by artist Regina Meredith-Fitiao. In addition to her classroom duties, Meredith-Fitiao worked alongside First Lady Cynthia Malala Moliga of the Friends of the Museum, local curator Erika Radewagen and Executive of the Arts Council Mary Taufete'e to organize the museum’s re-opening. To supplement her students’ classroom activities, Meredith-Fitiao offered them the opportunity to assist in the preparation.

“My students helped get the shelves of artifacts in place for the opening ceremony,” explained Meredith-Fitiao. “This gave them an immersion in the collection of items that have valuable meaning and history. We also discussed how Mrs. Jean P. Haydon, her husband Governor John Haydon, and Pulefaasisina Palauni Tuiasosopo, among others, initiated the museum for the benefit of our community.”

Meredith-Fitiao emphasized how projects like assisting the Museum bring real experience to classroom content. “Art 161 allows students to engage in practical work like siapo making and its process,” she said. “Going to the Museum and seeing a siapo mamanu made in the 1980s by the late Mary J. Pritchard, who played an integral role in perpetuating tapa making locally and sharing it everywhere possible, confirmed to students how precious the art form is, both past and present. For the Art History students, the ability to look at artifacts up close helps them make the connection of how archaeologists and art historians value artifacts because they help explain cultures of the world and their development.”

For architectural drafting major Madjid Al-Shehri, 37, the experience of assisting the Museum represented “an opportunity to be artistically active in the community. Coming to know our ancestors were artist who made siapo, tapa and even canoes was a thrilling experience.” Leizel Grace E. Penalosa, 20, a visual arts major, gained similar insights. “The artifacts helped me understand more about the Samoan culture, since I’m Filipino,” she said. “I also learned that a trip to a local history museum or large city art museum can be very entertaining and enlightening. A museum can also be educational on aspects of history such as civil rights or environmentalism.”

Only weeks after the ASCC students who had assisted with the preparation joined Meredith-Fitiao and other dignitaries for the Museum’s re-opening ceremony, their next public activity found them attending the two-day PIC Filmmakers Convening workshop held in September at the Tauese P. Sunia Ocean Center. At the workshop, PIC Executive Director Leanne Ferrer and Director of Program Development and Content Strategy Cheryl Hirasa talked about PIC’s promotion of filmmaking as a creative medium for Pacific islanders to share their stories. They screened different short films and explained the application process for filmmakers seeking support.

A variety of community members took advantage of the event, ranging from those brand new to the medium to others already experienced with it. “Attending the PIC workshop exposed the students to another medium in the art world, film,” said Meredith-Fitiao. “It helped illuminate how art comes in many forms, and how filmmaking can support non-fictional information in the form of documentary as well as the fictional storytelling done in feature films.”

Once again, the ASCC students expressed appreciation for the experience. “Not only did it challenge us to explore art in a third dimension, but it also gave us the ‘know how’ to get financing,” commented Al-Shehri, while Penalosa reflected, “I’ve considered becoming a filmmaker in the future, so the PIC workshop helped me learn more about the whole process of producing a film.” Cheryl Hirasa of PIC noted how the ASCC students helped enliven the event. “It was amazing to see so many students from the College,” she said. “They were very engaged, asked questions and contributed to the project brainstorming discussion.  Two of the students had ideas on projects they’d like to do and I truly hope they pursue them.”

Reflecting on the two different yet linked public activities, Meredith-Fitiao hopes her students will use their experiences to support the preservation of their culture. “I hope that students continue supporting the Museum and its events,” she said. “This will make them feel a part of being the guardians of cultural artifacts for the next generation. At the same time, they’ve seen how a medium like film can help them document or tell stories about the time they live in and their own cultural experiences. I believe they now have a better understanding of the dynamic between expression and preservation, by having looked into both the past and the future.”

More information on Fine Arts classes at the College can be found in the ASCC Catalog, available online at  www.amsamoa.edu.