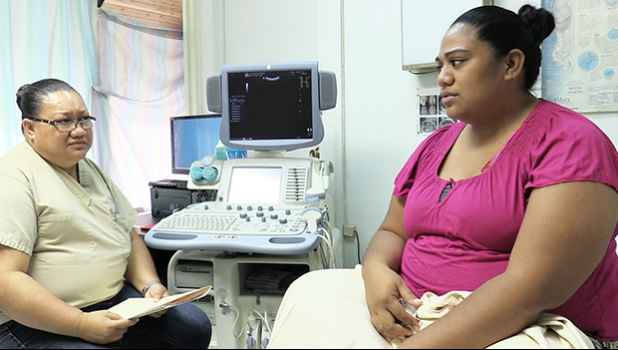 ASCC President Dr. Rosevonne Pato gave special remarks at the event, and ASCC-ACNR Land Grant Director, Aufa'i Apulu Ropeti Areta gave the welcoming and closing remarks, as well as opening and closing prayers. In attendance were ASCC and ASCC-ACNR faculty, staff and students, as well as local Environmental Protection Agency Director Mr. Ameko Pato, ASCC-ACNR partners from the Department of Health and Social Services Women, Infants and Children program, and a number of staff from the Department of Health.

Fepulea’i Dr. Micah Van der Ryn, Health Communications Researcher at ASCC-ACNR, recently produced the two films as part of the Health Communications Research and Media (HCRM) Program’s efforts to develop and evaluate effective health communication, social marketing strategies and messaging using a variety of media to bring about positive health outcomes for the Territory. The HCRM has focused on obesity and non-communicable diseases, both largely influenced by diet and lifestyle, as a primary health concern. A 2004 World Health Organization sponsored survey indicated that American Samoa’s adult obesity prevalence to be at 68%, and Type 2 Diabetes to be 47%.

HCRM strategies focus on stimulating behavioral and environmental changes that promote well-being and the prevention of disease. The program develops intervention strategies and media products with sensitivity to the target audience’s motivations, cultural values and beliefs in relation to health, the body, food, social relationships, the extended Samoan family and the land, using a socio-ecological model.  Each media and intervention is research-based and data-driven, with effectiveness measured through pre- and post-intervention data collection, as well as the use of control groups.

Fepulea’i gave a power point presentation about the HCRM program at ACNR, and then showed the two films, which represent the first two episodes of a proposed pilot series titled, “Alo Faatasi mo Se Amerika Samoa Maloloina (Row Together for a Healthy American Samoa)”. He next asked the audience to provide feedback via two brief survey forms, and through a brief question-and-answer segment following his presentation.

The first film, a 10-minute piece called “The Placemat”, follows one day in the life of an American Samoan family trying to live as healthily as they can from the land and sea, reflecting the way things were done in the past, before the onslaught of junk food, soda, and sedentary lifestyles.  The film also shows the family modeling the healthy behaviors messaged on the placemat.  ASCC-ACNR’s HCRM Unit developed the actual placemat, and Fepulea’i made the film to promote its use and the health messages on it, in particular to promote obesity prevention among American Samoa’s children. This film is currently being screened and tested as part of a pilot intervention study with ASWIC clients, who also receive the placemats to use at home. Fepulea’i gave preliminary results of a survey related to this.

The second film, a 38-minute work titled “Gestational Diabetes Screening mo lou Lumana’i Manuia”, focuses on gestational diabetes (GDM), which affects roughly 30% of American Samoa’s pregnant women. The film represents the media intervention component of a study being conducted in partnership with Dr. Nicola Hawley of Yale University School of Public Health, Dr. Bethel Muasau-Howard, head of LBJ’s Prenatal Clinic, and Dr. Micahaela Howells of the University of North Carolina, Wilmington. The study addresses a lack of knowledge of and screening for GDM among American Samoan pregnant women. GDM can cause birth complications, and may lead to permanent type-2 diabetes later in the mother’s life, especially without proper lifestyle management.

“Gestational Diabetes Screening mo lou Lumana’i Manuia” tells the story of a pregnant American Samoan woman who learns about the disease and wants to get tested, only to face a variety of obstacles. Through the story, the audience learns about the disease, its causes and risks, and the importance of taking charge of one’s health and asking questions. Fepulea’i noted how research has found that narrative story formats convey health messages more effectively compared to straight information delivery. “Narratives get people’s attention and they more often remember the information,” he explained, referencing a developing field of educational entertainment or “edutainment.” “Gestational Diabetes Screening mo lou Lumana’i Manuia” is scheduled to be launched at LBJ Tropical Medical Center’s Prenatal Clinic later this month.

“Overall, these projects highlight the extended community engagement and education that is essential to positive developments in American Samoa,” said Fepulea’i. “We hope to develop more health promotion media in American Samoa specifically designed for local audiences.” For more information on this and other ASCC-ACNR health projects, call 699-1575.