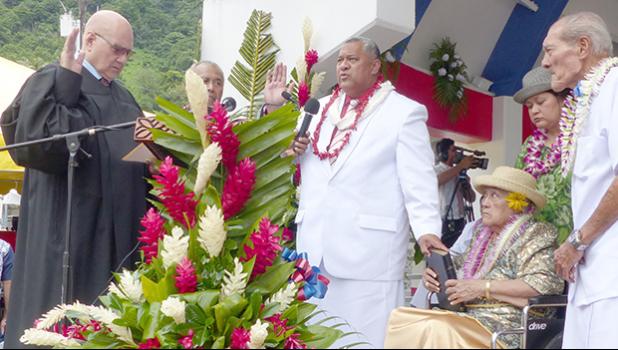 It was an extra special day for Lemanu, the lieutenant governor for 8-years under the Lolo Administration, as it was his birthday, turning 61-years old, while his wife, First Lady Ella Perefoti Mauga, was absent on stage at the Fagatogo Pavilion since she is among the estimated 600 American Samoa residents still stranded in the US due to suspension of air service as a result of COVID-19 restrictions in the territory.

For Talauega, who was accompanied to the ceremony by his wife, Marian and other family members, he turns 52-years old on Feb. 17th. VIPs and special guests sat on stage at the Fagatogo Pavilion.

The Fagatogo malae was packed with former cabinet members, three-choirs who performed hymns for the service and members of the public who attended the event, which began six-minutes early before the 11a.m. starting time, after out-going governor, Lolo Matalasi Moliga and his wife Cynthia Moliga arrived at the Pavilion.

Lemanu greeted Lolo, who took off his Samoan “ula fala” to drape over Lemanu and the pair embraced amid applause from the audience before heading up to the stage as the inauguration ceremony commenced.

One of the subject matters covered in Lemanu’s nearly 30-minute inaugural address — delivered in Samoan — are American Samoa’s residents stranded in Hawaii and the U.S. mainland saying that he and Talauega send their love and best wishes to all of them as well as Toa o Samoa serving in all branches of government.

He acknowledged the wishes of these stranded residents to return home to be reunited with their families and announced that starting today, Monday, his administration will begin discussions focused on returning of the territory’s residents stranded in the U.S.

He thanked the outgoing Lolo Administration for all the effort and work in keeping America Samoa free from the deadly pandemic — COVID-19.

Lemanu didn’t provide any other information on when his new administration is looking at starting repatriation flights but the Lolo Administration had said that it would be next month February, giving the government sufficient time to review entry protocol, now that a COVID-19 vaccine in available.

Also during his address, Lemanu publicly announced his first cabinet appointment, which is Paramount Chief Mauga T. Asuega to continue serving as Secretary of Samoan Affairs.

Samoa News notes that this cabinet post is not subject to Fono confirmation as the Secretary of Samoan Affairs — according to the constitution — serves at the pleasure of the sitting governor.  And the governor is expected to release soon the full list of acting directors.

At the outset of his inaugural address, the new governor recalled one of the main themes of the the Lemanu and Talauega campaign and that is to treat everyone equally, and this will also the path for the new administration treating every one the same.

“Our government must meet the needs of our people, not the people to the needs of the government. Our efforts must be inclusive of the people’s voices from all walks of life,” according to the “Our Foundation” message printed in the inauguration program, which is also same one that was delivered on the campaign trail by Lemanu and Talauega.

It also recalls the Lemanu and Talauega campaign theme, “Integrity, Leadership and Commitment”.

“It is truly my privileged to accept the reigns of leadership to serve as your Governor,” together with Talauega, as lieutenant governor for American Samoa, said Lemanu in his English “Inaugural Address” printed in the program.

“Your belief and support in our vision for the future of American Samoa has allowed this day to come to fruition,” he said. “As we endeavor in this new journey together, we are reminded of the resilience and love that our people have shown throughout this past year and know that any challenges that may lie ahead are no match for the strength our community possesses within.”

He called on everyone for their continued “support as we collectively navigate the changes that have arisen as a result of the global [COVID-19] pandemic we are living through”.

The ceremony followed the Inauguration Luncheon — at the Fagatogo Malae — and it was also a public event.