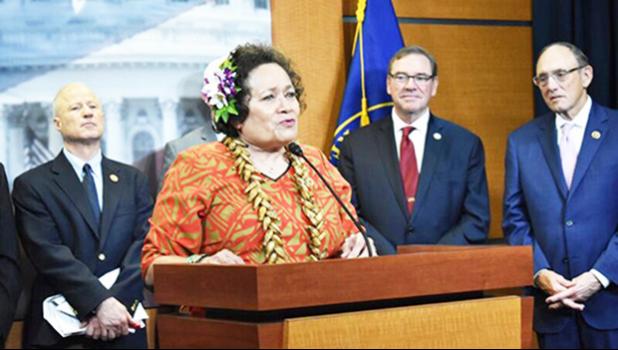 Washington, D.C. – Congresswoman Aumua Amata welcomed this week’s first look at the House Interior Appropriations bill, which contains her request for a third straight yearly increase for American Samoa, which is over $2.5 million more than the federal budget proposal for American Samoa Government.

This would be the third straight yearly increase after Congresswoman Amata secured $718,000 in 2018 and $250,000 in 2017 – a total increase of about $1.5 million in three years, and each time also restoring substantially more than the administration’s proposal for the territory.

“The Committee continues to be concerned about the impact of Cyclone Gita on American Samoa, and rejects the reduction proposed in the budget request. The recommendation includes a $400,000 increase for general operations,” continues the Committee’s stated reason.

Although this bill references Storm Gita, these funds would be separate and additional to the major disaster relief bills also currently moving through Congress. (Congresswoman Amata is separately urging passage of disaster relief legislation providing millions in nutrition assistance for American Samoa [differing bills contain $5-to-18 million, depending on which bill prevails], and potentially a 100 percent match in Medicaid assistance for the year, broadly estimated as another possible $10 million).

Congresswoman Amata will continue working with the Appropriations Committee leadership as the bill moves forward. The Subcommittee has approved the bill, and the full Committee mark-up was scheduled Wednesday.