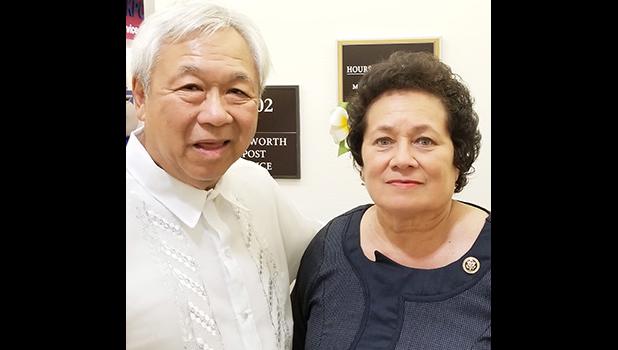 “It was special to be there in honor of these veterans and their courageous service, along with members of both parties and an audience of 650 people in beautiful Emancipation Hall, to witness this moving ceremony,” said Aumua Amata. “The Congressional Gold Medal is Congress’s highest honor, and this presentation will preserve the history of their heroic service for generations to follow.”

In World War II, about 260,000 Filipino soldiers fought under the flag of the U.S., and 57,000 Filipino troops died. Many of the surviving soldiers became U.S. citizens, and since the Philippines at that time was a U.S. commonwealth, all of them were U.S. Nationals. Sadly, they were not provided the same benefits and recognitions as the rest of the U.S. military in the decades following the war. More than 70 years after the end of the war, their service was honored this week in the U.S. Capitol, and will never be forgotten. The Gold Medals were struck by the United States Mint and specially inscribed with the names of prominent battle areas in which they served.

“All of us should be deeply appreciative to see this honor bestowed on behalf of those who fought for freedom,” continued Congresswoman Amata. “I’m especially pleased to know that children and young people from the Filipino community here in American Samoa, and all over the United States, will learn more about this heritage of bravery and service, and know that their sacrifices were for a great purpose.”