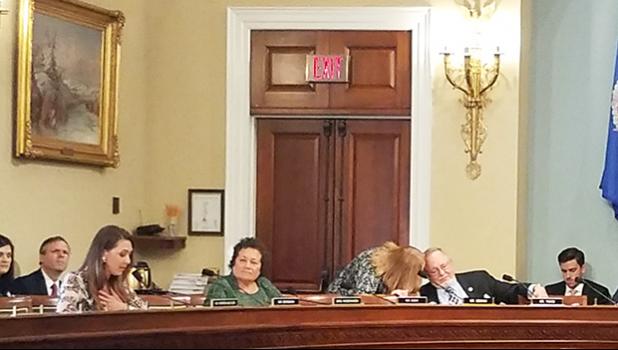 Washington, D.C. – Congresswoman Aumua Amata and the Natural Resources Subcommittee on Indian, Insular and Alaska Native Affairs examined two legislative solutions to localized concerns, one in Alaska and one on Native American lands throughout the country.

“Much like American Samoa, other Insular, Indian and Alaskan areas often have issues that just don’t have a ‘one-size-fits-all’ federal law, due to culture, heritage, economic or geographic reasons,” said Aumua Amata. “Today’s work centered on two bills, one facilitating land possibilities in Alaska and a policy change allowing more commerce on Indian lands. I’m happy to support my colleagues as they advance these legislative solutions.”

Specifically, the hearing included H.R. 211, introduced by Congressman Don Young of Alaska, which would authorize the Interior Department to facilitate a land exchange with the Chugach people. Also examined was H.R. 5317, introduced by Congresswoman Jaime Herrara Beutler, a policy change revoking an outdated law to allow Indian-owned businesses to produce certain alcoholic products on Indian lands and removing an unnecessary competitive disadvantage.

“I often find a kinship among the various island, Indian and Alaskan communities that are both part of this great country, and like American Samoa desire to preserve their own special heritage,” continued Congresswoman Amata. “Routinely, the people of Insular, Indian or Alaskan areas have localized needs arise that require legislative attention, and this Subcommittee allows the Members most tuned in to these communities to thoroughly examine these issues.”