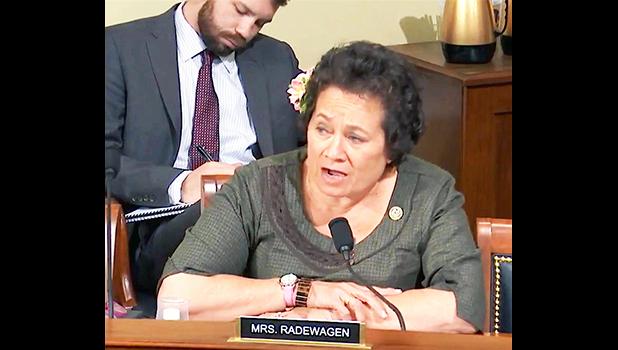 Also to reduce costs for U.S. Nationals from American Samoa
Source: Office of the Congresswoman

Washington, D.C. – Wednesday, Congresswoman Aumua Amata introduced a bill that would give U.S. Nationals from American Samoa a much more affordable and streamlined process if they choose to convert their National status to full U.S. citizenship.

“This will save the tremendous burden and costs of having to move to another State from American Samoa for the application process,” said Aumua Amata. “So often a National from our islands has to quit a job or move away from their family for months to become a citizen. No more upon passage of the American Samoan Citizenship Simplification Act.”

Too often, good paying jobs in the civil service, law enforcement, the military or private sector require citizenship as a condition of employment, particularly those jobs requiring security clearances. This will allow American Samoans to choose citizenship without having to make unnecessary moves, incur unnecessary travel costs or take time away from their job or family to study and take the citizenship test.

“Another benefit of this bill for those serving in the Armed Services from American Samoa is that they won’t have their lives or duty assignments disrupted when they decide to become a citizen to advance their career. In order to receive promotions to the officer ranks or get security clearances, those serving need to become U.S. citizens,” continued Congresswoman Amata.

“As U.S. Nationals, these service men and women were raised under the U.S. flag, in schools that taught U.S. history, and they’ve owed allegiance to the U.S. since birth. It makes sense that their path and other American Samoan civilian Nationals to U.S. citizenship would be simplified. Those serving in the military have already taken an oath to the U.S. Constitution. Under this bill, U.S. Nationals would be able to choose citizenship more readily and affordably.”

The bipartisan bill, which includes Congresswoman Madeleine Bordallo (D-Guam), the Ranking Member on the Armed Services Subcommittee on Readiness, as an original cosponsor, would streamline the U.S. citizenship process for U.S. Nationals, reduce their costs of doing so and recognize that they are not the same as foreign nationals seeking citizenship, as they already owe their allegiance to and are already legal residents of the United States.

The bill would not change the U.S. National status of anyone on the islands unless they choose to pursue citizenship.

In summary, the bill waives residency requirements and civics tests for U.S. Nationals; allows the Secretary of Homeland Security to administer the citizenship process (applications, oaths, interviews, ceremonies) in American Samoa, eliminating the obligation to leave the island and its costs; and finally, allows the Secretary of Homeland Security to adjust application fees to reduce costs, and to waive such fees based on economic hardship.

Samoa News notes that the late Congressman Faleomavaega Eni introduced a similar bill in US Congress in June 2008. His bill sought to amend federal Immigration and Nationality Act (INA) by adding a specific section dealing with the naturalization of U.S. nationals living in American Samoa.

In presenting his bill, Faleomavaega asked, “Why should U.S. nationals living in American Samoa be required to travel to the continental U.S. or Hawaii and stay there for at least three months before they can apply for naturalization?

“This is a real financial burden for our people and, because American Samoa is a U.S. Territory which pays its allegiance to the United States, our people should not be subjected to this requirement,” he noted.

Citing the treaties of cession of Tutuila and Aunu’u, and Manu’a, which ceded these islands to the U.S., the bill stated that for more than 100 years American Samoans who are U.S nationals have demonstrated “their loyalty and allegiance” to the U.S.

It said that since ratification in 1929 of these two treaties, many American Samoans have joined the Armed Forces and fought for the United States through various wars and most recently in Iraq and Afghanistan.

Provisions of Faleomavaega’s bill stated that for any person born in American Samoa and residing continuously within American Samoa from the date of such person’s birth up to the time of admission to citizenship, the following are waived:

•     Requirements for naturalization under INA section 312 (which deals with among other things understanding the English language and U.S. history)

•     All requirements as to residence and physical presence within the United States and a particular state for naturalization under INA section 316 (which is the U.S. residency requirement and that the applicant is of good moral character)

At the time, Faleomavaega said he was hopeful that his colleagues in Congress would support this bill “which recognizes the contribution of American Samoans to the United States, and which will give U.S. nationals living in American Samoan an option to apply for U.S. citizenship directly from American Samoa.”

The bill did not pass.

Of note, Samoa News should point out that the Fono questioned Faleomavaega about the bill, at the time, with some senators speaking against it, citing their unwillingness to allow non-Samoans to become US citizens through this bill, even though they are US Nationals by birth in the Territory.