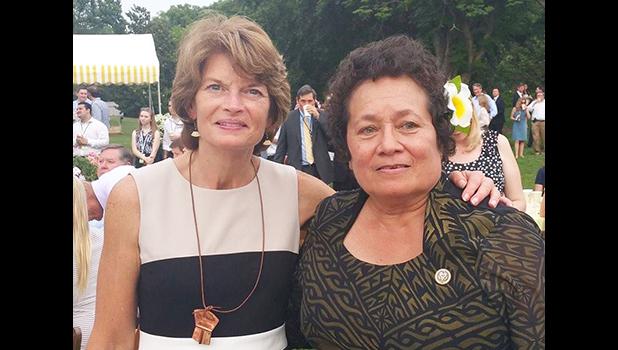 Washington, D.C.— Congresswoman Aumua Amata welcomed notice from the National Park Service (NPS) of a $100,000 grant for improvements to the Lions Park in American Samoa through the Land and Water Conservation Fund (LWCF), and highlighted recent congressional action that improved that program’s funding for the territories.

“Last year, I voted in the Natural Resources Committee in support of a bipartisan bill to permanently reauthorize the LWCF and these ongoing grant programs, and LWCF funding improvements for the territories became law earlier this year,” said Aumua Amata. “This grant will mean a bigger and better basketball court area in the park, which will be great for our young people. Congratulations to the American Samoa Parks and Recreation Department, director Kenneth Tupua, and especially Mile Farani for his work on this project.”

In September 2018, Congresswoman Amata voted in support of reauthorizing the Land and Water Conservation Fund (H.R. 502), which supports public lands, parks and recreation areas, and seeks to encourage outdoor activities, including fishing, and it passed the Committee with bipartisan support. Then, in March 2019, Congress went on to permanently reauthorize the program through S.47, the John D. Dingell Jr. Conservation, Management, and Recreation Act (formerly known as the Natural Resources Management Act).

This major legislation was led by Sen. Lisa Murkowski (R-Alaska), and contained 120 legislative items collected from efforts in the prior 115th Congress, including bills supported and cosponsored by Congresswoman Amata. This new law specifically changed the formula to treat territories more equitably with states in consideration of LWCF funding.

The grant for Lions Park funds expansion of the basketball court into two basketball/multi-purpose courts, along with a two-foot revetment wall along the shoreline providing stability. It is part of a series of grants from the National Park Service to support outdoor activities and local parks.

The National Park Service is part of the U.S. Department of Interior, and the grants were announced by Interior Secretary David Bernhardt and Acting NPS Director David Vela.

“Thank you once again to Chairman Murkowski for leading the reauthorization of this program and the funding improvements for the territories,” said Congresswoman Amata. “I also appreciate Secretary Bernhardt and Acting Director Vela for sending these funds to American Samoa.”

In recent remarks about the LWCF, National Park Service acting director Vela said, “We are pleased with the permanent authorization of the Land and Water Conservation Fund, which came as part of the John D. Dingell Jr. Conservation, Management, and Recreation Act earlier this year. Investing in high quality outdoor recreation space has proven to increase the public’s physical, cultural, and spiritual well-being.”