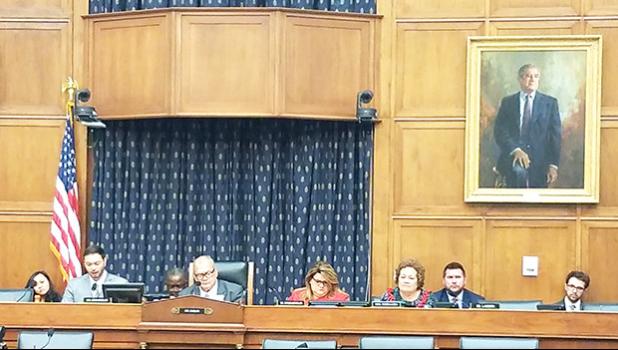 Washington, D.C. — Congresswoman Aumua Amata took part in a joint hearing of the Natural Resources Committee, on which she serves, and the Foreign Affairs Committee, examining the role of the key partnerships the United States has with the Freely Associated States in the Pacific.

The hearing was entitled, Sustaining Insular Relationships, and focused on extending the future of U.S. friendships and association with Palau, the Federated States of Micronesia, and the Republic of the Marshall Islands.

“The Freely Associated States are important allies in the Pacific,” said Aumua Amata. “They are security partners, and the people of these island countries have a direct cultural and social impact on the United States and the territories. Their citizens live and work in our communities and serve in our military. They are our neighbors and family members. The American Government has obligations to these nations, but also receives important value in return.”

Congresswoman Amata appreciates the leadership of Chairman Kilili Sablan of CNMI, along with testimony from the following expert witnesses:

In late 2018, a bipartisan group of Members of Congress from the Pacific region worked together for passage into law of the Real ID Act Modification for Freely Associated States Act (H.R. 3398), which Congresswoman Amata cosponsored and strongly supported with a statement in the Congressional record.

This action was followed in 2019 by a successful bipartisan request recently to the administration improving the implementation of that law to comply with congressional intent. These efforts benefit people from the Freely Associated States as they live, work or attend universities in the United States.

“I’ve had a couple occasions to return to the Marshall Islands over the last few years, where I once lived, and I’m always made to feel so welcomed,” continued Amata. “These nations are strategic allies and partnerships in the great Pacific region.”