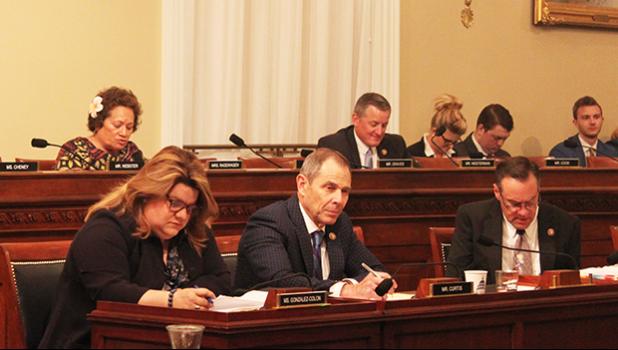 Washington, D.C. — Last week, Congresswoman Aumua Amata and the Natural Resources Committee conducted a budget and policy hearing with Secretary of the Interior David Bernhardt, and she placed a focus on American Samoa’s fishing needs.

In her questioning of the Secretary of the Interior, Congresswoman Amata asked if there would be any changes to the recommendation by his predecessor, former Secretary Ryan Zinke, regarding reopening portions of the marine monuments to American Samoa’s fishing.

In his response, Secretary Bernhardt said the Department’s prior recommendation stands. That response is good news for this policy pursuit for American Samoa, as it means the recommendation to allow much-needed restoration of American Samoa’s fishing waters is not being withdrawn or changed under a new Secretary.

“It’s important to know that the Department of Interior has no plans to pull back the prior recommendation which would allow for restoration of American Samoa’s fishing waters,” said Aumua Amata. “During Secretary Bernhardt’s confirmation process, I repeatedly stressed that American Samoa benefits from a consistent vision in the leadership of the Department of Interior, and I’m pleased that the transition will not interrupt or reduce this policy priority. As it stands, there is a clear recommendation on the books that would allow for restoration of some of American Samoa’s waters.”

The American Samoan Government and its people were barely consulted before either were established or expanded. As a result, local fishermen are barred from accessing waters that Samoans have been visiting for over a millennium.

“Fishing is the backbone of our economy in American Samoa, and absolutely a part of life for us in the islands,” continues Congresswoman Amata. “Past use of unilateral executive orders to expand a marine monument designation without the input of local or indigenous populations was not the right way to go about protecting our waters.”

“Our fishermen are the most responsible and regulated in the world,” concludes Amata. “The Pacific Remote Islands Marine National Monument was arbitrarily expanded to over six times its prior size, and took away from our people access to an area three times the size of California.”