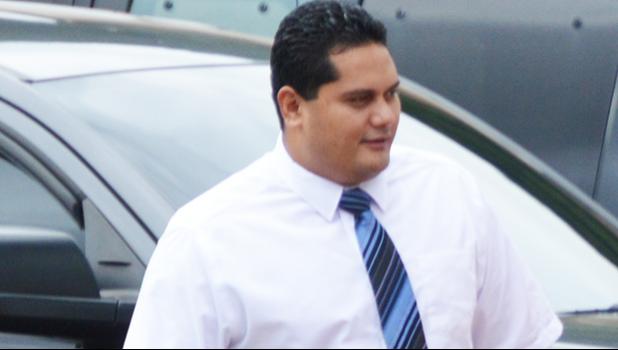 Pago Pago, AMERICAN SAMOA — The third co-defendant in the food stamp fraud case is scheduled to appear in court next month for sentencing, after his plea agreement with the government was accepted last week.

Vincent Toeava, who has been in custody since his arrest early last year, unable to post a $450,000 surety bond, appeared in court last week for a Change of Plea (COP) hearing.

He was represented by private attorney David Vargas, while prosecuting was Assistant Attorney General Laura Garvey.

Toeava’s two co-defendants have already been sentenced. Jane Vasa, a former DHSS employee pled guilty to misdemeanor stealing and was sentenced to 1 year probation, while businessman Liren Zhang, a.k.a Kevin, convicted of stealing, was released from custody last month and sentenced to 7 years probation. As part of their plea agreements with the government, both Vasa and Zhang agreed to testify for the government during Toeava's trial, which was set or this week.

Toeava, the son-in-law of former DHSS director, the late Taeaoafua Dr. Meki Solomona, was initially charged with 19 criminal counts including forgery and fraud, all felonies.

But under a plea agreement with the government, accepted by the court, Toeava pled guilty to 2 counts of forgery, a class C felony, punishable by imprisonment of up to 7 years, a fine of up to $5,000 or both. All the remaining charges were dismissed.

With his guilty plea, Toeava, admits that between 2017 and 2018 he altered food stamp coupons belonging to the ASG.

The case against Toeava surfaced following a quick review of what caused the depletion of ASNAP funds for the first quarter of fiscal year 2018 (Q1 2018).

Excessively high amounts of counterfeit ASNAP food coupons were being redeemed by three ASNAP authorized retailers during this period of which co-defendant Zhang owns two.

At the time, Toeava worked as a DHSS ASNAP Retailer/ Redemption Officer. His job was to monitor ASNAP retailer compliance and reconcile Food Stamp coupons redeemed from the bank.

The counterfeit scheme began during October 2016, when Toeava approached co-defendant Vasa and coaxed her into giving him blank Food Stamp printing paper, under the pretext of ‘using it to generate capital’ for the purpose of starting a business wherein she would be a partner. And in September 2017, Toeava involved Zhang as the retailer that would deposit ‘altered’ (or forged) coupons for redemption, with a ‘50-50’ split of the money.

Zhang went along with the scheme, after Toeava assured him that ‘Papa Meki’ would be notified. The first forgery transaction involved both men altering $86,854.00 in $10 denominations worth of food stamp coupons.

Later when Zhang took the food stamp coupons to ANZ, the bank refused to redeem them because of the alterations, however, Toeava was contacted and later walked into the bank with a letter in hand.

The letter Toeava furnished, according to the police report, was a forgery because he didn't have the authority to generate one, according to DHSS director Muavaefaatasi.

The letter was drafted in the absence of a DHSS letterhead, and the ASNAP Assistant Director told police she had no knowledge of it.

The letter, according to the court affidavit, states in part that Zhang's businesses are approved "after our profound investigation in terms of examining the code bar below the coupons… please accept coupons from these vendors only."

The contact person listed on the letter was Toeava.

Toeava gave thousands of dollars in food stamps to Zhang every two weeks, according to the government.

Toeava remains in custody. He will be sentenced next month.

Along with his brother Spencer, Vincent Toeava is charged in a separate case involving drugs allegedly found at the TCF last year.

It involves two straws allegedly found in a bottle of hair gel that had been given to an unsuspecting TCF officer by Vincent to be delivered to a female inmate, which were discovered by police last October.

A person described as Vincent’s “right hand man” told police that he helped package and distribute the drugs in the TCF.