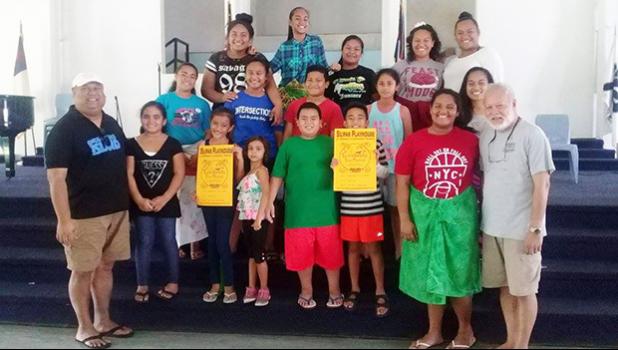 Film star and performing arts activist Uelese Petaia has been giving acting tips to young children of Silipas Playhouse as it prepares to stage “Twinderella, The Musical” this week — Nov. 1 & Nov. 2 (Wed. & Thurs.) at the Gov. H. Rex Lee Auditorium.

“In addition, the famed Samoan actor shared his passion about stage work and encouraged the young children to become professional actors in the future if they so desired.

“He recommended that the cast should have fun as they communicate with each other as well as the audience,” Mageo said.

The concept of a children’s theatre was piloted six months ago.

“During the summer, I get a lot of phone calls about private piano lessons, but I couldn’t enroll any new student because I don’t have any slots available,” said Mageo.

Now, the children’s theatre is an on-going program at the Center for students who have been on a waiting list for private music lessons. With theatre work, Mageo helps out with the students reading and acting skills.

Modeled after a literature-based concept, Mageo used Twinderella to teach basic elements in literature such as character, tone, personality, dialogue, irony, plot, theme, and conflict. “I shared with my students the concept of the Samoan faagogo, which has almost the same universal elements found in Western fiction.”

During the dedication of its new administrative building, the local American Red Cross acknowledged Dancing Fingers as an official Third-Party Donor after a successful “A Night at the Opera” fundraiser where more than 20K was raised to complete the new building.

In the same way, part of the proceeds from Twinderella will go directly to the local American Red Cross disaster fund.