Intila says she came to work in Am. Samoa under false pretenses 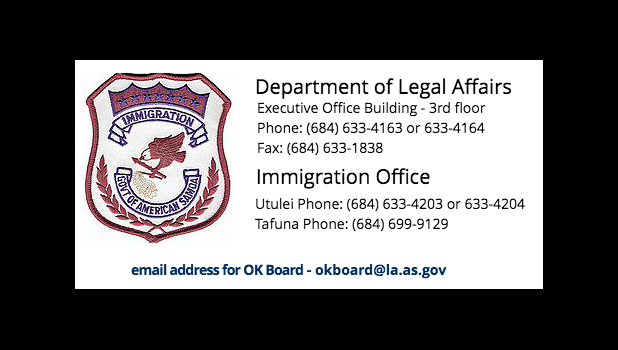 Claims that her sponsor made her pay for everything, even zippers and thread
By
Ausage Fausia
ausage@samoanews.com

Samoa News was able to obtain a copy of Joselyn M. Intila's letter, dated June 11, 2018 to HC Fanene Edda Wyberski, in response to her sponsor, Rep. Vui Florence Saulo's request to the Board to ban her from re-entering American Samoa for 10 years.

Fanene told Samoa News the Board did not receive a copy of the letter.

Samoa News obtained copies of both Vui’s letter to Fanene dated June 6, 2018, along with the letter to the Chief Immigration Officer (CIO) Peseta D. Fuimaono, dated June 11. Both letters were published in the June 29, 2018 edition of Samoa News.

In her letter, Intila, who became an illegal immigrant when her ID expired May 31, 2018, said she does not refute some of the things her sponsor mentioned in her letter.

“I was brought to the territory from the Republic of the Philippines to work as a seamstress with Siniva and Armellia’s Sewing Shop. I do come from a humble beginning and was grateful for the opportunity to work in the territory,” Intila said in her letter.

When she was first approached to come work at the company, Intila said she was told she would be working for a woman who is well known and highly respected by the people of American Samoa. She was also told that the woman is wealthy and she would never have to worry about her pay, or lodging, as it would be provided free of charge.

“I was surprised that upon arriving, none of this was true. My travel here was deducted from my pay. I was not provided dormitory type of lodging that the company paid for, and I was practically left to live at a rental property owned by Vui where I was to pay rent,” Intila said in her letter.

She added that many times, she asked to repair the windows and other things at the rental property, but her requests allegedly fell on deaf ears and were denied.

She was told that the company will provide a sewing machine, but she was surprised to learn that all the employees, including herself, were told to maintain their own sewing machine and they also had to purchase their own supplies including zippers, thread, and all other items needed to complete a dress.

“Most disappointing was the hostile environment this created at the shop. Employees fight over material and supplies and they accuse each other of stealing,” the letter said.

On many occasions, Initial wrote, Rep. Saulo would allegedly "walk into the shop and yell at us, or even threaten us with deportation;" she would allegedly say, “I’m warning you.”

"Many of us would be in tears after she left and this made working at the company extremely stressful,” Intila continued.

“The stress level is multiplied when we are pressured to complete our work when customers come to pick up their clothes. If we cannot complete our work before closing, we have to pay a fee to the clerk who has to keep the shop open for customer pick-up. This was not agreed upon in my original contract and is absolutely unfair. I was allegedly forced to work almost 20 hours each day for 7 days a week, just to make enough money to meet all my expenses," Intila wrote in her letter.

She said the company paid for her travel back to the Philippines for medical attention, but she paid for her medical treatment. Upon returning back to work on the first day, she was told to pay all the company’s money that was used for her travel. Deductions were made from her paycheck, which meant that she had to work more hours to make sure she made enough money to pay her bills.

When her father passed away, Initila said her request to attend her father’s funeral in the Philippines was denied by Rep. Saulo. She said she requested for assistance from the company for her travel but the company only gave her a loan of $800. She felt that this was the breaking point in her relationship with her sponsor, who was also her employer.

Intila said the involvement of the couple who owns Off-the-Rock was because of her. She asked the woman for help for her father’s funeral. According to Intila, the woman was not able to give her money; however, she helped by providing more seamstress work for her so she can get more customers and more money to help out with her dad’s funeral.

Intila said she asked the woman if she could employ her because she was very unhappy with her sponsor and her company.

In the end, Intila told Fanene that she never violated any immigration laws.

Last month, the local Department of Homeland Security (DHS) conducted an internal investigation regarding the allegations made by Intila against her sponsor and employer, Rep. Vui.

Two weeks ago, DHS director, Samana Semo Ve’ave’a confirmed to Samoa News that their investigation is now complete and the allegations that there was possible human trafficking elements involved are not true.

Samana explained that since their investigation is now closed, the matter between the Filipino woman and her sponsor/employer is now transferred to the Immigration Office for further action.

Despite the statement contained in her letter that she never violated any immigration laws, Samoa News was told by a member of the Immigration Board last week that Intila admitted in front of the board during a hearing last Wednesday that she did violate immigration laws by refusing to renew her immigration ID, and also for not staying with her current sponsor.