“Empower me to inspire you” 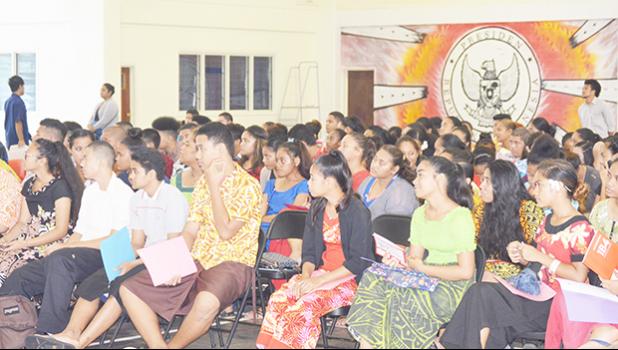 A look at some of the 200 youths who attended yesterday’s official opening of the Department of Youth and Women’s Affairs (DYWA) sponsored annual youth program at the Pago Pago Community Center. The participants were selected from among the 800 students, who registered for the ASG Summer Youth Employment program that opened last week.

Among the ASG leaders who attended the opening were Gov. Lolo Matalasi Moliga, Secretary of Samoan Affairs Mauga Tasi Asuega and several cabinet directors including DWYA director Jonathan Fanene, who offered opening remarks and thanked the governor for continuing this annual program, which shows the Administration’s continued commitment to the betterment of the Territory’s future generation.

In his proclaimation naming July as Youth Month, the governor said that “American Samoa’s most valuable resource is its people including our youth, upon which we rely as vital community assets and resources, having their unique knowledge, idealism, skills perspectives, ideas, and creativity, that contribute to their awareness, service, advocacy, and philanthropy.”

He said all government, private, church, and non-profit organizations should recognize the significance of the youth of the territory “to our future well-being, and craft, implement, and evaluate programs to assist in their development.”

He said the reason the government supports and provides resource help to its youth is because they will be our future leaders.

In these modern times, “the development of our youth is shaped not only by our families, village leaders, church and government, but also by outside influences that can be both positive and negative,” the governor said.

Among the activities for the two-week program, the youth will be involved in the various types of government services delivered to the public.