“The Vision and Future of Am Samoa” 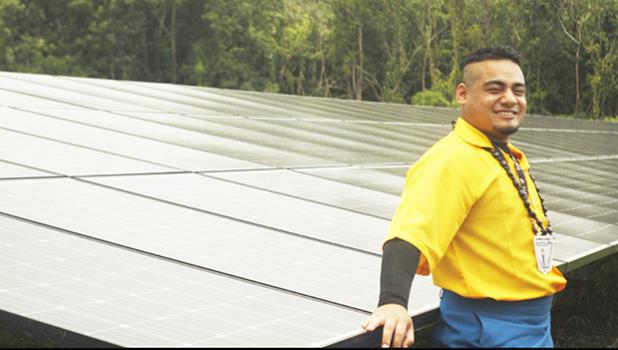 Manu’a HS student sees great potential in island home
By
Blue Chen-Fruean
blue@samoanews.com
With the installation of the new micro grids and since the conversion to solar power, the island of Ta’u, according to Maiava, now saves almost 110,000 gallons of diesel, a year.

When the director of the Pacific Storytellers Cooperative, Daniel Lin, visited the Manu’a Islands last month to host a weeklong workshop for the high school students there, he didn’t imagine that the end result would be spectacular.

A handful of young Segaula took part in the project and all of their stories are now part of the Pacific Storytellers Cooperative — an Internet platform for place-based stories from all Pacific Islands to be shared with a global audience.

Azariah Usoali’i Mathew Maiava, who authored a short piece, entitled; “The Vision and Future of American Samoa,” was one of the participants and his story focuses on the positive effects of the new solar micro grids in Manu’a.

The goal of the workshop was to give students the chance to tell their story, in their own words, and snap photographs that center around their thoughts on the island group’s recent switch to solar energy.

“As a territory of the United States, American Samoa is trying to place solar power plants (or micro grids) into our communities and our lives,” Maiava wrote. “Due to the large extent of carbon dioxide emissions, we are aware of the numerous environmental issues that burning fossil fuels has caused, from coral bleaching to global warming to climate change.”

With the installation of the new micro grids and since the conversion to solar power, the island of Ta’u, according to Maiava, now saves almost 110,000 gallons of diesel, a year.

“We can safely say that we will be saving more money, and that 2.5 million pounds of carbon dioxide will not be released into the air,” Maiava pointed out, adding that “our island is now 98% green because of this decision made by our current Governor, Lolo Matalasi Moliga, who is also an alumnus of Manu’a High School.”

Maiava continued, “We are now playing a role in saving our world. We, as a community, have a vision that our territory will one day become 100% energy green.”

For his write-up, Maiava interviewed WorldTeach volunteer Margret McGovern, 23, a graduate of Harvard University, who said, “Within 100 or more years, I see American Samoa becoming more independent, self-sustaining; and will be self-reliant instead of relying on the many western culture contributions.”

McGovern hopes that the territory will be capable of creating its own autonomy, which will open people’s minds to more conservation efforts.

“Knowing that our territory has very few hybrid or electric cars, in many years to come, we should have more that roam our islands, reducing the amount of carbon monoxide and exhaustion fumes,” Maiava wrote.

The young author was able to speak with yet another teacher at Manu’a High School, Rutgers University graduate Leticia Nascimento, 29, who said, “Ta’u, Manu’a, is heavily dependent on Tutuila for resources. So, having this project will help this island excel in the future. Not only that, but hopefully it will be the first for many to come.”

Maiava said, “Understanding that our island does not have its own economic system, our possible challenges are to have our crops and other goods transported out to the world.” He added that by accomplishing many of these goals and aspirations, “we may even bring a lot more attention to our island, which may even attract curiosity and tourism.”

Maiava concluded, “Living here in Ta’u, Manu’a, I can say that this new solar project has helped our community become more aware of our surroundings and the many conflicts that we are facing.  Since our island is now 98% energy efficient, we can save 110,000 gallons of diesel and 2.5 million pounds of CO2 each year. Fortunately, we are playing a good role in our world to stop air pollution and many other hazardous environmental practices. Hopefully, we will have more valuable projects here in American Samoa to attract tourists and build our islands into something better than what it is now.”

Maiava and four of his schoolmates from Manu’a High School are part of the Manu’a Storytellers, a group of young people from the Motusa who are members of the Pacific Storytellers Cooperative, focused on sharing stories about their island home with the world.

Lin, who is a freelance photographer for National Geographic and a Senior Policy Specialist for the Pacific Resources for Education and Learning (PREL) in Honolulu, Hawai’i is proud of his Segaula class.

“Their published work is a reflection of the collective voice of their community, as well as a testament to their capacity for using everyday devices — phones, tablets, computers — as powerful tools for telling stories,” Lin said in an initial interview. “I couldn’t be prouder of this young bunch and I challenge people of all ages in American Samoa to do the same.”

Lin hopes that he could talk the local Department of Education to allow such a program to be carried out in classrooms on Tutuila Island.

Stories and photographs compiled by the Manu’a High School students have been published online and can be found at maptia.com

The Cooperative accepts submissions in all forms from Indigenous Pacific Islanders and residents, including written stories, photos, videos, and poetry.