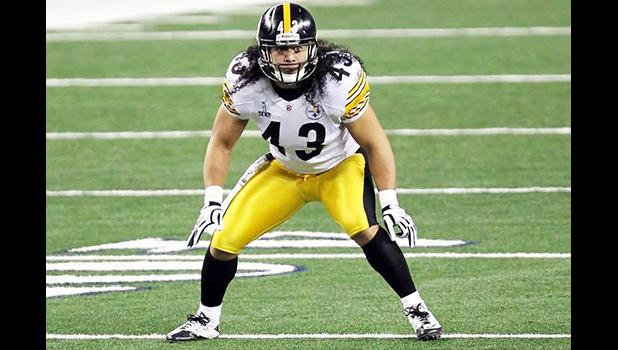 Headlined by professor emeritus Richard Scaglion, Theodora Polamalu — the wife of the Pittsburgh Steelers’ beloved safety — and Penny Semaia, Pitt’s senior associate athletic director, the event highlighting “Tropic of Football,” a book detailing the culture of American Samoa and its affinity for football, certainly pulled out all the stops.

Ruck, who earned his doctorate at Pitt in 1983 and has since continued to teach at his alma mater, has done this before. This is his sixth book in total, and the fourth one that involves sports and the impact that minority groups have had on the game.

The event was held inside of a packed room at Posvar Hall on Friday afternoon, and began with an exclusive airing of the trailer for the Polamalus’ upcoming documentary, “Songs of a Lost Island.” While the audience may have bemoaned being subjected to a documentary, the trailer was far from bland. Scaglion commented on one clip where a group of Samoan boys at a football camp belted out a traditional song.

“It really shows the spirit of Samoa,” he said. “It’s not like any of them are trained singers. They sound fantastic.”

Scaglion, an anthropologist who spent most of his career studying the people of the Pacific Islands, kicked off the event by providing some background details about the inhabitants of Samoa, who would be the stars of the next two hours.

“Polynesians don’t get much respect, but they certainly deserve it,” Scaglion said. “I mean, how did these people do it? The prevailing opinion has been that they inhabited these islands by accident, pushed along by the winds, but they brought crops and pigs to the islands with them. You don’t bring pigs on a fishing trip.”

As would be the theme for the event, Scaglion mixed facts with fun, condemning the way the Samoan islands are subjugated by the West — Samoa and American Samoa, both inhabited by the same cultures and people, are cut apart by the international date line — with an amusing anecdote.

“Travelling between the two nations, the IRS didn’t believe that I could have had two hotel rooms on the same night,” Scaglion said.

Polamalu then spoke about the culture of her husband’s people. Fa’a Samoa, or “the Samoan way,” is paramount in their lives, both at home on the islands and long after they leave. The Samoan way puts a premium on family, service, religiosity and discipline — something that came under public scrutiny after Alabama quarterback Tua Tagovailoa revealed he and his father’s stories of his strict upbringing.

It is Fa’a Samoa, all of the speakers agreed, that has led to the disproportionate dominance of Samoans in sports today — in rugby or on the gridiron. With Pacific Islanders making up less than 1% of the American population, the youths who join Pop Warner or school teams by the thousands each year vastly overrepresent their relatively tiny population, especially in California and Hawaii. American Samoa, with a population of less than 60,000, had more than 30 people in the NFL as of 2014.

Read more at The Pitt News