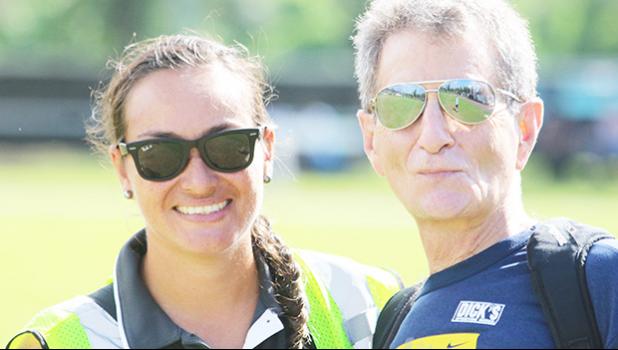 “Tropic of Football: The Long and Perilous Journey of Samoans to the NFL”
By
Tony Gasu
tony@samoanews.com

Pago Pago, AMERICAN SAMOA — Earlier this week, the author of “Tropic of Football: The Long and Perilous Journey of Samoans to the NFL” – released his book at the Feleti Barstow Library in Utulei, where fans and readers had the opportunity to ‘Meet The Author’ Rob Ruck in person and he got a chance to discuss the book one-on-one with the locals.

During his trip to the territory this past weekend, Ruck was able to visit Sua’ese Pooch Ta’ase and the Vikings – they are on the cover of the book.

He also had the chance to enjoy ASHSAA’s varsity football action at the Veterans Memorial Stadium last Saturday, where he spoke with a Samoa News sports reporter about his trip to the island.

"I don’t write books for academics, I write books for people who care about sports, and if I write a book about sports in American Samoa and Hawai’i, then it’s my job, it’s my duty to come here and talk about it …And find out where I made mistakes, where I could’ve done things better – I think that the story of sports here is a story that Samoans used to tell about themselves to the world; it’s a wonderful story, it's about people who work hard and play harder, who lose but persevere, and in the end they become the best in the world at what they do,” Ruck said.

“I hope the book becomes an asset that children years from now can read, and understand the history of the fa’aSamoa and the island’s sport.”

Rob Ruck is an award winning sports historian, who is also a professor of history at the University of Pittsburgh. When asked how he was inspired to write about football in American Samoa, he said he was inspired by former Pittsburgh Steelers All-Pro Safety, Troy Polamalu, and other Samoans in the National Football League like former NFL All-Pro Linebacker, Junior Seau, Quarterback Marcus Mariota of the Tennessee Titans, and Defensive Lineman Domata Peko of the Denver Broncos and their emotional spiritual qualities that were rare.

He said, “I was curious about the culture that created a Troy Polamalu, a Junior Seau, a Marcus Mariota, a Domata Peko – that led me here seven years ago. At first I thought this was much like the Dominican Republic that I’ve written about a lot, football instead of baseball, Samoan instead of Spanish, south of the equator instead of north, and then I realized in a couple of days, that there’s a really important difference.”

Ruck continued, “There’s an integrity of the culture here, a continuity of the culture that stretches back for several thousands of years, it’s almost unrivaled around the world. And the more I understood, and I have still much to understand, the more I realized how critical Fa’asamoa was to the emergence of football and the reason why Samoans and Polynesians are so good at the game.”

According to Ruck, it took him about seven years to create the Tropic of Football book, and it wasn’t an easy journey. He told Samoa News that he has been going back and forth between the Territory and the US over the years in writing his book.

“I came here for four years in a row, spent a couple of weeks each time and a lot of the book is in Hawai’i and California because of the Samoan migration to those places – I had probably drafted the book in five years and to get a publisher took another year and to get through editing and publication, a year after that, so it’s been about seven years since I began.”

During his visit to watch ASHSAA’s football games last Saturday, Ruck told Samoa News that the sport has developed quite well between his visits to American Samoa.

“What I’ve noticed on the field is there’s a lot more passing than there was a few years ago and the sophistication of the game seems to be increasing and I think the coaching is getting better,” he noted.

Comparing how sports are played and developed in American Samoa and the US, he said there’s one particular thing that kids in American Samoa have that the kids in the US don’t have – a rare quality, but it can be dangerous.

“And yet what they don’t have is the ‘No Fefe’, the toughness, the discipline, and commitment to team – This is a ‘We’ culture, not a ‘Me’ culture, in the US, it’s often the other way. Now what I think, what I see here is problematic, I don’t think there’s much attention that is being paid to the physical risks.”

Ruck said there needs to be more people like ASHSAA/JPS ATC Florence Wasko to accommodate the toughness and the injuries occurring on the field every single game.

“I think there needs to be more trainers – Flo Wasko can’t do it all by herself no matter how heroic she is, she’s the most important man on the field … and she needs to have other people like her.

“Flo Wasko needs to have the support, and the teams here and in all sports need to implement the baseline concussion impact test, preseason test that allows them to assess kids when something happens during the season – Every single high school kid in the US has that every season.”

Ruck said “The ‘No Fefe’ is wonderful but there’s a downside and we have to protect our youth because the damage they incur when they’re young to their brains, is more severe than what happens later. And what we don’t want are these things from 10, 20, 30 years ago, to cripple these young people – They’re not going to admit to pain, they’re too stoic about it, and we’ve got to prevent that from happening too.”

Of his visit to the Home of the Vikings, Ruck said “The first time I was here, Mel Purcell told me that Pooch was taking football here to a new level, and I think he has – I’ve met a lot of coaches at the college level, and I’m not sure I trust all of them. But the coaches here, the commitment to their players and what they’re doing - It’s not about the money, it’s about the kids, and Pooch shows me that: how he cares for his kids – not just to win games, but to get that education. So getting a chance to talk to kids from Faga’itua was wonderful, it’s their team that is on the cover of the book. They are the heart and soul of the Samoan game.”

Ruck thanks all those who have contributed in helping him with his book. “This book was written because so many people here in American Samoa, Hawai’i and California gave me their thoughts and their insights, and made it possible, because otherwise, I wouldn’t have known a thing.”