Gabe Reid hasn’t played a game yet, but he’s making a big impression 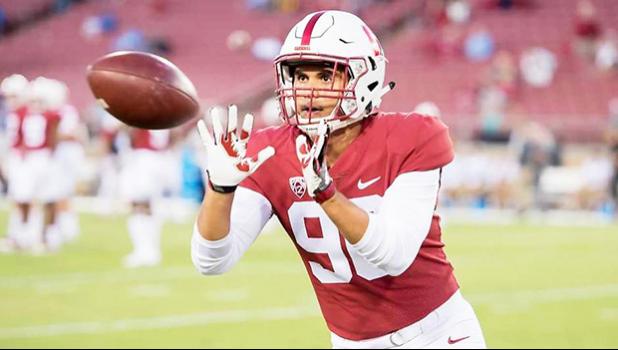 Palo Alto, CALIFORNIA — There’s an art to pass rushing that transcends speed and strength. Whatever it is, Gabe Reid has it. And he has yet to play a college game.

In discussing Reid, a redshirt freshman outside linebacker, he uses another word: “phenomenal.”

“Gabe Reid has been a phenomenal pass rusher since the spring,” Anderson said after Sunday’s open practice. “His natural pass rush ability is phenomenal. He had that ability in high school.

“Some guys just have that really good feel. He had a ton of sacks in high school. He’s got a great feel of getting around the tackles. He’s a little shorter than some of (the great pass rushers Stanford has had), but he knows how to use his hands and his leverage. He’s got a quick first step.”

Reid also has the required intensity, which he thinks he inherited from his father, Spencer, a former BYU linebacker who played for the Panthers and Colts in the NFL. Four of Gabe’s uncles also played college ball, including the one he was named after. That Gabe Reid played tight end at BYU and for the Jets and Bears. Two of young Gabe’s cousins also played football in college.

“I like to say that football’s in my blood,” he said. “Growing up, I had a passion for the game. Getting after the quarterback has kind of been my thing.”

At Timpview High School in Provo, Utah, he had 251 career tackles and 41 sacks for a team that won three state titles.

He signed with Stanford in 2015 but went on a two-year Mormon church mission to American Samoa.

“I wanted to go there since I was little,” he said. “That’s where my roots are, my heritage. My dad was born there and went to high school there.”