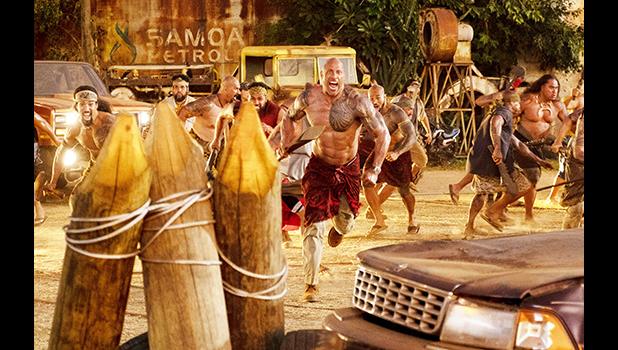 A big part of the film is set in Samoa, but was filmed on Kaua'i.
Source: Yahoo Entertainment

Hollywood, CALIFORNIA — As Dom Toretto is fond of reminding us over and over and over again, the Fast & Furious franchise is all about family. But as far back as the 2001 original, the series has also placed a strong emphasis on diversity. In fact, the Fast & Furious movies saw the creative and commercial value in filling the frame with actors of different races and cultures long before cinematic universes like the MCU and DCEU figured it out. That tradition continues in the franchise’s first spinoff, Hobbs & Shaw, which builds its entire climax around star Dwayne Johnson’s Samoan heritage.

After spending much of the movie tangling with super-powered bad guy Brixton Lore (Idris Elba) on European soil, Luke Hobbs (Johnson) brings his sibling partners Deckard and Hattie Shaw (Jason Statham and Vanessa Kirby) back to Samoa to make one final stand. But this isn’t a case of three against the world: Hobbs heads into battle backed up by his extended Samoan family. “What was really interesting about Hobbs being from Samoa is we needed a rich world to build on his character,” Hobbs & Shaw director, David Leitch, tells Yahoo Entertainment. “That was really important.” (Watch our video interview above.)

Johnson himself has spoken openly about what it means to him to see his heritage represented onscreen through sequences like a pre-brawl haka dance. And Leitch — whose credits include Atomic Blonde and Deadpool 2 — saw it shape his performance on set. “It was a great opportunity for [Dwayne] to reconnect with his roots, and for everyone involved [in the film] to learn about that culture they didn’t know about,” he explains. “That was really important for me. If you look at my work, I try to approach all things with color-blindness and diversity in terms of casting.”