Dawn raids in New Zealand remembered in exhibit 40 years after 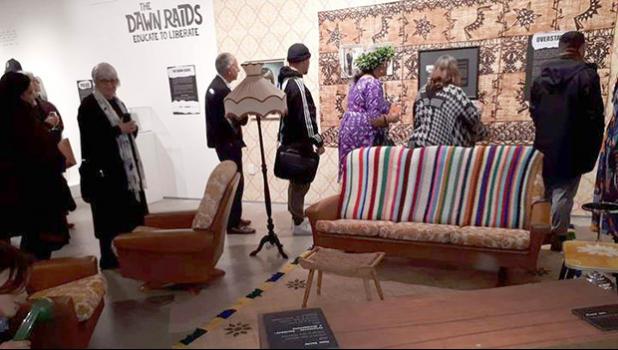 Porirua, NEW ZEALAND — More than 40 years after the infamous dawn raids on Pacific islanders, those who were there are being asked to tell their story for a new generation hungry to know about the raids.

That was one of the messages conveyed to about 100 people who braved a frigid Thursday evening in Porirua, gathering to see the opening of a new exhibition.

But this time, the doors were opened with a blessing, rather than charged down by police.

They walked to a corner of Pataka, the gallery in Porirua, into a mustard living room; splotchy wallpaper, beige armchairs, a flickering black-and-white television.

It was a portal to the 1970s, where Pacific families would have cowered as they lived through the dawn raids, said Pauline Smith, the exhibit's creator.

"I thought, imagine if you could step back into that time when it was happening, that people might go in there and feel like were standing back in that time," she said.

The exhibit, which was first displayed in Invercargill and has already been to Auckland and soon Christchurch, was based off a book for young people Dr Smith wrote last year.

The dawn raids kicked off in 1974 and reached a peak two years later.

Through the 1950s and '60s, Pacific migrants were brought to New Zealand, many of them from what were then New Zealand colonies. They were brought over primarily to fill gaps in the labour market, often poorly paid and back-breaking manual labor.

A selection of images from the 1970s, the era of the dawn raids, by photographer John Miller, as part of the exhibition. [Photo: RNZ / Moera Tuilaepa-Taylor]

But as the economy plunged in the early 1970s, the spotlight - and the blame - was directed towards overstayers.

Homes were raided at dawn, Pasifika people were stopped for random checks in the street. The police walked into factories to deport people, they even targeted the bars of pre-gentrification Ponsonby.

Pasifika were being targeted as overstayers, but in the 1970s most overstayers in New Zealand were from Britain and Australia, and they were targeted to a significantly lesser extent.

But Dr Smith said when she speaks to people about it today, it seems largely forgotten.

"I was lecturing at the teachers' college and when the students came in, probably 2 percent of any of the students knew about the dawn raids or had heard about them," she said.

"It really troubled me. This is our history, this is New Zealand history and we're just not learning about it, so that really motivated me to think, well what can I do about it?'

One of the things that came out of the era of the raids was a Pacific awakening, personified in the creation of the Polynesian Panthers, a movement founded to fight back for the rights of Pacific New Zealanders.

Founding member Alec Toleafoa said the story of the dawn raids and race relations in the 1970s is not a pretty one, but one that needs to be told.

"The government of the day was exposed as having no integrity, they lied, they thought 'let's quickly bury that and not have to see it again'," he said.

"I guess the great thing that this exhibition and the book is doing is bringing those things to light, and saying how can we appreciate this, look for a way of healing as opposed to a way of embitterment."

Dr Smith said there's even a reluctance among Pasifika to talk about it within their own families.

"I've even encountered a bit of that now, we've got people in their 50s, the children who witnessed it as little people, they then talk to their parents and they say 'oh no no, we don't talk about that.' They still experience that shame and humiliation."

But despite that, Dr Smith and Mr Toleafoa said they've found a hunger to learn about the era among today's youth that they've not encountered before.

Another of the Polynesian Panthers' founding fathers, Tigilau Ness, said the group is still around, and still as relevant as ever. But nearly 50 years after their first gathering in a Ponsonby flat, they spend more time today talking in schools than marching in the streets.

"The Polynesian Panthers is part of the NCEA now. So, you know, we say get us while we're still alive," he said.

And Dr Smith's exhibition is another way of telling that history.

Attached to the exhibition was a request for information too, Dr Smith is asking for people who were there in the '70s to tell their stories, so the future can learn.