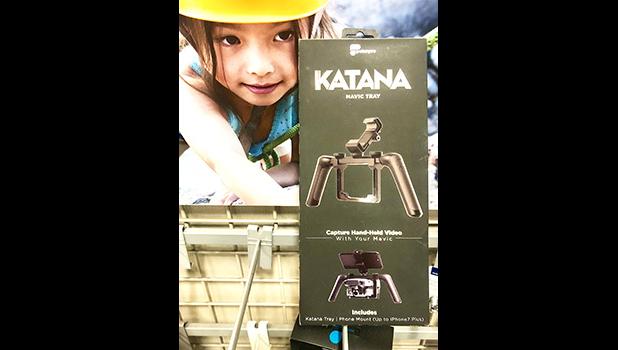 Cool Stuff has raved in the past about Polar Pro’s ND (neutral density) filters/polarizers and in the future will brag about their gimble locks, monitor brackets and sunshades. Polar Pro is one of the few aftermarket companies that “gets it” thus adding significant functionality and value to your DJI Drones.

The Katana takes the stability of your flying drone allowing you to use it on land by hand. This is critical because you are not legally allowed by the FAA to fly in proximity of people, airports, military bases, and stadiums.

Once you pop your drone on your Katana with the propellers popped off, it is no longer a drone... it is just a land based gimble that goes anywhere without restriction and operates with complete safety around people.

When Troy Polamalu popped out of the Governor’s VIP Lounge in 2011 (I think that’s the year…), I was directly behind him with a big heavy professional Sony Camcorder to capture your warm greeting. Imagine if I had a lightweight “Osmo +” Gimble or a Katana attached to a drone... my results would have been superb award winning excellence instead of just “pretty darn good.”

Cool Stuff has the Katana for his DJI Mavic Pro — but smartly, Polar Pro also makes the grade for your Mavic Air and DJI Spark.

You can buy an Osmo + or Osmo 2 gimble for several hundred dollars, but for $50- $79 you can economically have your DJI Drone do double duty, using your iphone or ipad as your monitor/ controller.

Best Buy, on Alakawa St. in Honolulu is our regular go to DJI authorized retailer... nearby Drone Services Hawaii (Dillingham Ave) is also a great choice for DJI gear and accessories with the additional ability, as an authorized DJI Drones, and gimbles repair station.

Both Samoas are heavenly for drone photography. While tourism efforts seem to be primarily focused on cruise ships, the ASG could probably add another 10,000 photo drone yearly tourists if they get the images and word out internationally.

Sadie’s by the Sea is a safe early morning launch site. Ships at sunrise entering Pago Pago Harbor is an exhilarating experience from the shore or onboard (Cool Stuff has done both) — or a simple sunrise caught against Rainmaker’s womanly curves.

In the age of online social media, even ‘shamateur’ photographers and novice drone pilots can spread millions of dollars of free publicity to a world looking for the peace and natural splendor of the Samoas.

Polar Pro and DJI are Samoa’s best friends, know it or not. Get a DJI Drone, get a Katana and capture the world of your island and your beloved village.