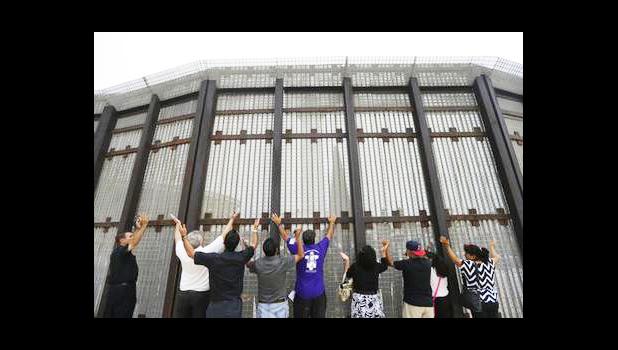 THE FACTS: The government's Global Forecast System produced a computer model on Sept. 1 that projected Irma would hit the New York City area on Sept. 10. The model was adjusted within a few days to show Irma's target as south Florida, but that didn't stop several sites from posting stories based on the old model. A YouTube video included in some of the stories used model images taken from weather site Tropical Tidbits. Levi Cowan, who runs the site, tells the AP the forecast is "obviously nothing like what is portrayed."

NOT REAL: Trump's Border Wall Gets Full $1.6B Funding In 'Big Win'

THE FACTS: President Donald Trump's planned wall along the Mexican border hasn't been funded by Congress despite this headline from Daily Wire. Trump has asked Congress for an initial $1.6 billion in funding, but Congress has yet to approve that request. A measure that cleared the House to give the White House the funds to start construction hasn't been taken up by the Senate.

THE FACTS: This story from The Last Line of Defense continues an ongoing hoax about bodies being found on Bill and Hillary Clinton's property in Chappaqua, New York. Police have dismissed the hoax and say they have investigated no such thing. The Last Line of Defense includes a disclaimer on the website that notes it presents "fiction as fact and our sources don't actually exist."

THE FACTS: This hoax story claims that a Delaware debit card linked to an account funded with child support payments prevents parents from using it to buy alcohol or cigarettes or to make car payments. The debit card does exist, but its terms and conditions list no such restrictions.

NOT REAL: Dwayne 'The Rock' Johnson Dies at 45 After a Terrible Stunt with Double Failed

THE FACTS: The actor and pro wrestler is alive even though a slew of viral headlines are claiming he died. The stories offer no information aside from the headline and include a video featuring Fox News anchor Neil Cavuto. Cavuto announces "some very sad news" before the video cuts off and the viewer is prompted to share the story.