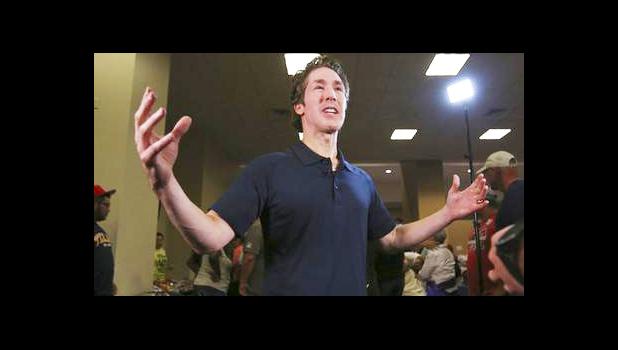 NOT REAL: Joel Osteen Sails Luxury Yacht Through Flooded Houston To Pass Out Copies Of 'Your Best Life Now'

THE FACTS: The televangelist defended himself this week against criticism that he didn't open up his Houston megachurch as a shelter sooner, saying his doors never closed. But he didn't try to make amends by sailing a yacht through downtown Houston and handing out copies of one of his books. The article also included a doctored AP photo of a 2015 flood in Houston with a yacht named the S.S. Blessed digitally added to it. The story was created by the Babylon Bee, which calls itself "your trusted source for Christian news satire."

THE FACTS: Veteran State Department employee Candace Claiborne was charged with making false statements to the FBI about gifts she had received from Chinese intelligence agents in April, not treason, as claimed in a story first circulated YourNewsWire. She has pleaded not guilty. Claiborne joined the State Department in 1999, serving under the Clinton, Bush, Obama and Trump administrations.

NOT REAL: Navy destroyer collides with building in downtown Houston

THE FACTS: Harvey's wind and rain are leaving a path of devastation across Texas and Louisiana, but the storm didn't cause a Navy ship to crash into a building. The story shared by Duffel Blog, a self-described satire site focused on the military, includes a clearly doctored image of the USS Mustin floating on floodwaters with the city's skyline in the background. The Mustin is based in Japan.

THE FACTS: A News Punch story claims a boxing promoter and public relations executive named Barry Gibson was found shot to death in Washington, D.C., last month, days before the boxing match between Floyd Mayweather and Conor McGregor. The article says Gibson had told the media that the fight was fixed during a July news conference in Toronto. Washington Metropolitan police spokeswoman Rachel Reid tells the AP there have been no reports of a homicide victim named Barry Gibson. A photo of the supposed crime scene included with the story is actually a picture taken during the 2002 sniper attacks in the Washington area.

THE FACTS: Wyoming's wildlife won't resemble that of the Australia, despite a story claiming kangaroos have been released in the state. The April Fools' Day hoax from a site named County 10 includes pictures that falsely depict researchers releasing kangaroos to create tourism and hunting opportunities. The story also claims researchers are looking into introducing koala bears, wallabies and Tasmanian devils to Wyoming.