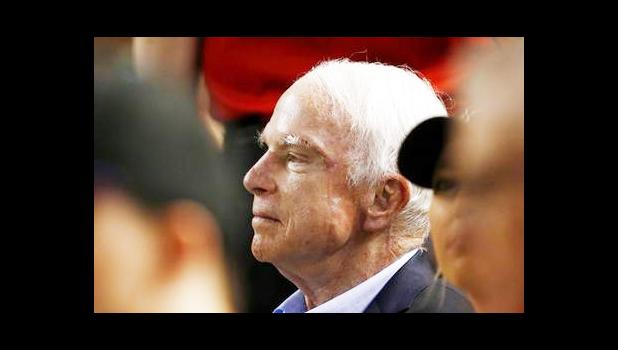 NOT REAL: John McCain Says He 'Accidentally' Voted No On Healthcare Repeal

THE FACTS: The Republican senator from Arizona has expressed no regrets over his dramatic vote last month that sank a GOP effort to repeal the Affordable Care Act, despite this story shared by americannews88.com. The 80-year-old McCain returned to Washington to weigh in on the effort after being diagnosed with a brain tumor. McCain explained shortly after the vote that he opposed the GOP bill because it didn't offer meaningful reform.

NOT REAL: US Senator Charged With 6 Felonies - Dems In A Panic

THE FACTS: The story shared by several hoax sites claims a Vermont senator named Warren Sherman has been arrested by the FBI and will face charges of illegal gambling and drug possession. Vermont has no senator by that name. A photo accompanying the story purportedly showing the fake senator in handcuffs is actually a picture of a former police chief that appeared in Newsday in New York.

NOT REAL: PUTIN: 'POPE FRANCIS IS NOT A MAN OF GOD'

THE FACTS: A story shared by usaconservativereport.com claims the Russian leader told an audience at a Russian Orthodox church that Francis was "pushing a political ideology instead of running a church." Putin did not mention the pope at an appearance at the church in question in Kronstadt last month, and the Kremlin press office tells the AP the story "is a fake." Russian media, which diligently record Putin's words, quoted him as generally thanking those who rebuilt the church. Putin has met with Francis twice, most recently at the Vatican in 2015.

NOT REAL: Ken Ham Claims His "Noah's Ark" Failed Because "Atheists Prayed For Me To Fail"

THE FACTS: The hoax site Newslo mixed accurate and false quotes and attributed them all to the founder of the Kentucky-based replica of Noah's Ark. Ham did blame "intolerant secularists" for criticism of his ark attraction that opened last year, but he did not write about "so much hatred" of atheists and say they wanted the Ark to fail. Newslo bills itself as a hybrid platform combining news and satire.

THE FACTS: A 59-year-old miner wasn't found in a Chinese mine abandoned following a 1997 accident. The story has been shared by several sites recently, but it originated in 2014 with an article from admitted hoax site World News Daily Report, which includes a disclaimer noting that all its stories are "entirely fictional."