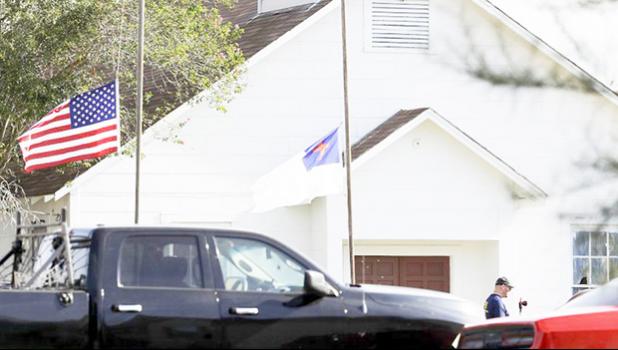 THE FACTS: Texas investigators have said the man who killed more than two dozen people at a rural Texas church Sunday didn’t harbor racial or religious motives. A viral story from a conspiracy theorist site alleged Devin Patrick Kelley was connected to an anti-fascist movement or was trying to start a civil war. Texas Department of Public Safety Regional Director Freeman Martin said earlier this week the mass shooting stemmed from a domestic situation.

THE FACTS: The city of Hoboken elected city councilman and civil rights lawyer Ravi Bhalla mayor on Tuesday. Bhalla is a Sikh, not a Muslim. Stories shared by various websites also falsely quote Bhalla as praising Allah during his victory speech and claim he has an agenda of implementing classes in local schools. Prior to his election, Bhalla was the target of anonymously distributed flyers that falsely labeled him a terrorist. He called the flyers unfortunate and said they didn’t reflect what Hoboken was about.

NOT REAL: Senator Rand Paul Assaulted At His Home By Antifa Thug

THE FACTS: Police say the Republican U.S. senator was assaulted at his Kentucky home by his longtime neighbor, not by an anti-fascist. Paul wrote on Twitter Wednesday that he suffered six broken ribs during the attack last week. Rene Boucher is charged with misdemeanor assault over the episode. His lawyer has called it a trivial “property dispute between two neighbors,” saying it had nothing to do with politics.

NOT REAL: One Year Ago Hillary Clinton Became First Losing Presidential Candidate in 50 Years to Not Concede in Public Speech

THE FACTS: Clinton gave a public concession speech the morning after Election Day, although she did not take the podium immediately after the Nov. 8, 2016, race was called for Donald Trump. The claim by the conservative Gateway Pundit blog that Clinton’s delayed concession was the first in 50 years of presidential elections is false. Democrat John Kerry waited until the next day to publicly concede to Republican President George W. Bush in 2004; Al Gore conceded five weeks after the 2000 election to concede to Bush while the race’s results were contested. Republican President Gerald Ford let his wife, Betty, deliver his concession speech to Jimmy Carter in 1976 because his voice was hoarse from campaigning.

THE FACTS: This offer looks too good to be true and it is. It asks users to answer survey questions and share the post in order to get 2 free tickets from the airline. Delta tells The Associated Press that the offer being passed around on Facebook is false. Fake anniversary giveaways like this have also targeted other prominent brands, including Pizza Hut.