No distress call after fishing boat with foreign crew wrecks 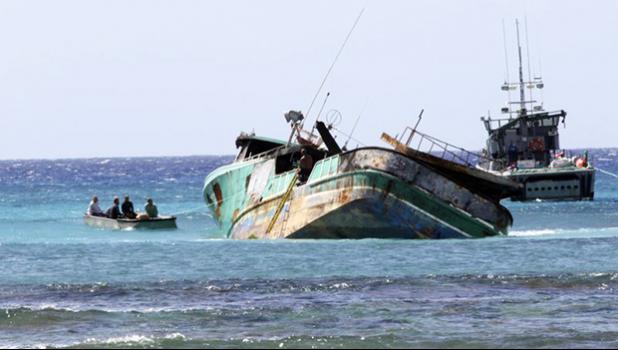 HONOLULU (AP) — A boat that ran aground off Honolulu while transporting foreign fishermen to work in Hawaii’s commercial fishing industry has raised new questions about the safety and working conditions for foreign laborers in this unique U.S. fleet.

A long, cramped journey to the United States for a group of fishermen from Vietnam, Indonesia, Philippines and Kiribati ended with a U.S. Coast Guard rescue last week after their fishing vessel smashed into a reef just off Waikiki’s shore. No one aboard the boat called for help after the crash.

A 2016 Associated Press investigation revealed the Hawaii fleet exploits a loophole in federal law to employ men from impoverished Southeast Asian and Pacific nations for a fraction of the pay an American worker would get, with some making as little as 70 cents an hour.

The men do not have authorization to enter the United States, so they are confined to boats while docked in Honolulu and not eligible for most basic labor protections. The AP report revealed instances of abuse and claims of human trafficking among the fleet.

When the Pacific Paradise ran aground just before midnight Oct. 10, eyewitnesses saw the wreck, and authorities raced to rescue the men with jet skis, boats and a helicopter. The 79-foot boat carried 19 foreign men and a captain, who officials say was the only U.S. citizen aboard.

The 20 men were at sea for at least 12 days before they crashed, the minimum time it would take to get from American Samoa to Hawaii, according to two fishing industry experts. The Coast Guard would not confirm how long the vessel was at sea.

Once rescued, the men met U.S. customs officials and were escorted to a pier to begin work on other boats. Customs and Border Protection said privacy restrictions prevented the agency from “disclosing the names of passengers, crew members and other law-abiding travelers,” spokesman Frank Falcon said in an email.

Customs officials deny entry to foreign workers, but Hawaii uses federal forms stamped “refused” as proof that they are legally allowed to work after going through customs and therefore can be given fishing licenses, the AP found.

The state Department of Land and Natural Resources provided fishing license records for the vessel, including the captain who was born in Vietnam and is now a U.S. citizen living in Hawaii and four foreign crew members.

Hawaii state Rep. Kaniela Ing said he was concerned that only five fishing licenses were registered with the state. The 15 other workers “are completely unaccounted for, and we don’t know where they are and what they’re doing here,” he said.

The vessel wasn’t carrying any fish when it crashed, the Coast Guard said.

“The issue isn’t whether or not there’s evidence that they’re being trafficked, it’s that there’s no evidence to the contrary,” Ing said. “There’s nothing saying these folks are here legally and aren’t being exploited because there’s no record.”

He tried in vain to get tightened regulations passed last year and may introduce legislation again but said the longline fishing industry is powerful because people love sushi.

The boat is owned by Honolulu-based TWOL LLC. A man who answered a phone number associated with the company identified himself as part-owner David Tran and referred questions to his lawyer, Brian Ho. Ho refused to answer questions Wednesday.

State Division of Aquatic Resources Administrator Bruce Anderson said it was unusual for a fishing boat to be in the crash area, which has no charted shipping lanes and where fishing isn’t allowed.

“Either they missed the harbor or perhaps they had some mechanical problems and drifted ashore, or it was just careless seamanship, the captain was drunk or asleep or whoever was at the helm didn’t realize that they were as close to shore as they were,” Anderson said.

The Coast Guard would not comment, citing its ongoing investigation.

“If they’re not calling for help ... they didn’t want authorities around them, they were hoping they could probably get it off or they could disappear into the night,” Kokinos said.

He also thought it would be difficult to have 20 people on a vessel its size.

“I would be surprised if there were more than 10 bunks, unless they had done some modifications to the boat,” Kokinos said, adding the conditions for the foreign workers were “probably deplorable.”

Sean Martin, president of the Hawaii Longline Association, an industry group, said officials closely monitor vessels when departing and returning to pick up crews. Boats must go to designated piers at the direction of state and federal officials and give 120 hours advance notice of arrival when returning from American Samoa with foreign crews, he said.

The Hawaii fleet’s treatment of foreign fishermen has led environmental and advocacy groups to file a complaint with the Inter-American Human Rights Commission, an autonomous body of the Organization of American States, which works to protect human rights. The U.S. is a member of that organization.

The complaint asks the commission to determine the responsibility of the U.S. government for human rights abuses against foreign workers in Hawaii.