Hawaii emerges from threat as storm veers away from islands 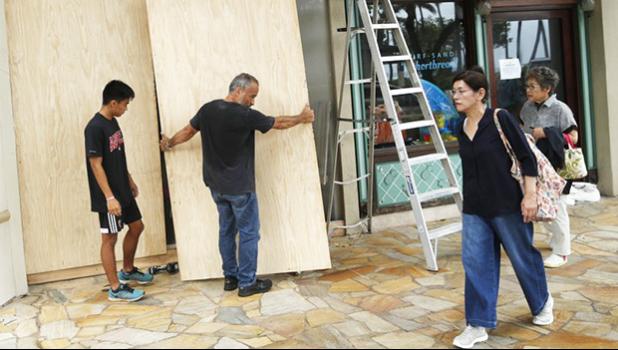 HONOLULU (AP) — Hawaii emerged Saturday from the threat of a potentially devastating hurricane after flooding forced evacuations on some islands but damage appeared less than feared despite historic amounts of rain.

Tropical Storm Lane, once known as Hurricane Lane, began to break apart as it veered west into the open Pacific, leaving behind sighs of relief and plenty of clean-up, especially on the Big Island where rainfall totals approached 4 feet (1.2 meters).

No storm-related deaths have been reported, though Big Island authorities said they plucked families from flood waters and landslides had closed roads.

The National Weather Service canceled all storm warnings for the state, several hours after shopkeepers in Honolulu’s tourist-heavy areas started taking down plywood meant to protect windows if the storm had made it that far.

Preliminary figures from the weather service show that Lane dropped the fourth-highest amount of rain for a hurricane to hit the United States since 1950. Hurricane Harvey, which devastated Texas a year ago, topped the list.

Landslides and pooling water forced the temporary closure of several highways, but the flooding was not as bad as it might have been because porous volcanic rock on parts of the Big Island absorbed it, said Brooke Bingaman, a National Weather Service meteorologist in Honolulu.

One of the island’s volcanoes is still erupting, and the rain could still cause whiteout conditions on some active lava fields due to steam.

About 200 miles and several islands to the northwest, tourists wandered Waikiki Beach and took leisurely swims as shopkeepers prepared to reopen.

Hotels began putting deck chairs back alongside pools. Dozens of surfers were in the Pacific, riding small waves. The breeze was light.

Winds were also calmer on Maui, which had seen about 12 inches (30 centimeters) of rain and wind gusts up to 50 mph (80 kph). On Saturday, winds were about 11 mph. Like the Big Island, Maui experienced flooding and landslides.

Lane first approached the islands earlier this week as a Category 5 hurricane, meaning it was likely to cause catastrophic damage with winds of 157 mph (252 kph) or above. But upper-level winds known as shear swiftly tore the storm apart.

As flooding hit the Big Island, winds fanned brush fires that had broken out in dry areas of Maui and Oahu. Some residents in a shelter on Maui had to flee flames, and another fire forced people from their homes.

Flames burned nine homes in the historic coastal town of Lahaina and forced 600 people to evacuate, Maui County spokeswoman Lynn Araki-Regan said. Some have returned, but many have not because much of the area lacks power, Araki-Regan said.

Those outages meant the water provider on Maui’s west side was unable to pump, so officials at the Maui Electric utility urged conservation — particularly important because firefighters need supplies to put out the remaining flames.

The central Pacific gets fewer hurricanes than other regions, with only about four or five named storms a year. Hawaii rarely gets hit. The last major storm to hit was Iniki in 1992. Others have come close in recent years.