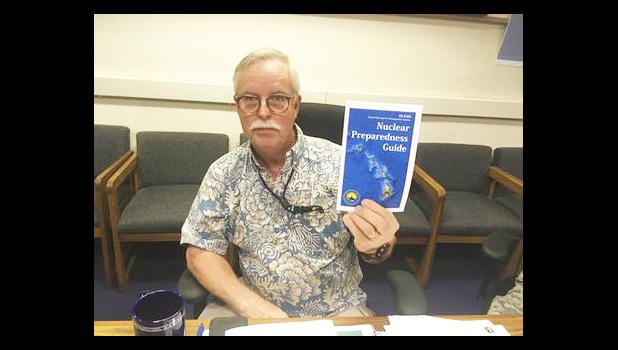 HONOLULU (AP) — Hawaii is the first state to prepare the public for the possibility of a ballistic missile strike from North Korea.

The state's Emergency Management Agency on Friday announced a public education campaign about what to do. Hawaii lawmakers have been urging emergency management officials to update Cold War-era plans for coping with a nuclear attack as North Korea develops nuclear weapons and ballistic missiles that can reach the islands.

Starting in November, Hawaii will begin monthly tests of an "attack-warning" siren the state hasn't heard since the end of the Cold War in the 1980s. The wailing siren will be tested on the first working day of each month, after a test of an "attention-alert" steady tone siren with which residents are already familiar.

Informational brochures, along with TV, radio and internet announcements will help educate the public about the new siren sound and provide preparedness guidance. "If they're not educated, they could actually be frightened by it," agency Executive Director Toby Clairmont said of needing several months to introduce the new siren.

Because it would take a missile 15 minutes - maybe 20 minutes - to arrive, the instructions to the public are simple: "Get inside, stay inside and stay tuned," said Vern Miyagi, agency administrator. "You will not have time to pick up your family and go to a shelter and all that kind of stuff. ... It has to be automatic."

He stressed that his agency is simply trying to stay ahead of a "very unlikely" scenario, but it's a possibility that Hawaii can't ignore.

Hawaii is an important strategic outpost for the U.S. military. The island of Oahu is home to the U.S. Pacific Command, the military's headquarters for the Asia-Pacific region. It also hosts dozens of Navy ships at Pearl Harbor and is a key base for the Air Force, Army and Marine Corps.

The Hawaii Tourism Authority supports preparing for disasters, but it is concerned that misinformation about bracing for a North Korea attack could scare travelers from visiting the islands, spokeswoman Charlene Chan said in a statement. "The effect of such a downturn would ultimately be felt by residents who rely on tourism's success for their livelihood," she said.

With that in mind, Miyagi reiterated, "Hawaii is still safe."

Hawaii residents, who already face hazards including from tsunami and hurricanes, are familiar with disaster preparedness. Because it's currently hurricane season, residents should already have an emergency kit that includes 14-days of food and water.

"It also works for this type of scenario," Lt. Col. Charles Anthony, spokesman for the Hawaii State Department of Defense.

Hawaii officials surveyed 28 U.S. states and cities about what they're doing for the North Korea threat. "They think it's too soon," Clairmont said.

But counterparts in California have contacted him asking for guidance now that they are starting to look at a similar effort, Clairmont said.