Guam's worries grow as tensions rise between US, North Korea 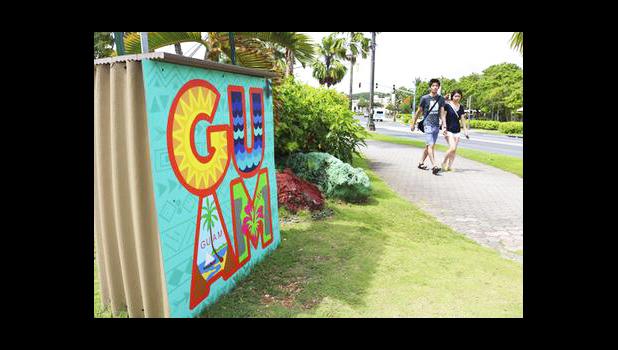 HAGATNA, Guam (AP) — Residents of the tiny Pacific island of Guam say they're afraid of being caught in the middle of escalating tensions between the U.S. and North Korea after Pyongyang announced it was examining plans for attacking the strategically important U.S. territory.

Though local officials downplayed any threat and Secretary of State Rex Tillerson was unruffled as he headed to Guam to refuel on his trip back to Washington from Malaysia, people who live and work on the island said they could no longer shrug off the idea of being a potential target. Guam serves as a launching pad for the U.S. military.

"I'm a little worried, a little panicked. Is this really going to happen?" said Cecil Chugrad, a 37-year-old bus driver for a tour bus company in Guam. "If it's just me, I don't mind, but I have to worry about my son. I feel like moving (out of Guam) now."

About 163,000 people live on the island that spans only about 12 miles (19 kilometers) at its widest. They are used to the threats from North Korea. But advances in the country's nuclear program paired with fiery rhetoric from President Donald Trump has raised the already high animosity and heightened worries that a miscalculation might spark conflict between the nuclear-armed nations.

Reports suggested North Korea mastered a technological hurdle needed to strike the U.S. with a nuclear missile. The advances were detailed in an official Japanese assessment and later a Washington Post story that cited U.S. intelligence officials and a confidential Defense Intelligence Agency report.

In response, Trump on Tuesday threatened the communist country "with fire and fury." On Wednesday, the North Korean army said in a statement that it was studying a plan to create an "enveloping fire" in areas around Guam with medium- to long-range ballistic missiles.

On his flight back to Washington, Tillerson said he never considered re-routing the trip to avoid refueling in Guam.

"I do not believe that there is any imminent threat," Tillerson told reporters aboard the plane. "What we're hopeful is that this pressure campaign (including sanctions), which the entire world now has joined us in, and with the engagement of China and Russia, two of North Korea's closest neighbors - that they can begin to persuade the regime that they needed to reconsider the current pathway they're on and think about engaging in a dialogue about a different future."

While it is extremely unlikely that Pyongyang would risk the assured annihilation of its revered leadership with a pre-emptive attack on U.S. citizens, some residents of Guam are concerned.

"If anything happens, we all got to be ready, be prepared, and pray to God that it doesn't happen," Daisy Mendiola, 56, said after finishing lunch with her family at a restaurant near Hagatna. "Everyone's afraid, because we're dealing with powers that's beyond us."

Other residents are worried about the political atmosphere and the government's ability to find a peaceful solution.

Todd Thompson, a lawyer who lives on Guam, said he laughed off past threats because he "figured cooler heads in Washington would prevail, and it was just an idle threat."

"But I have to say, I'm not laughing now," Thompson said. "My concern is that things have changed in Washington, and who knows what's going to happen?"

His brother Mitch Thompson, who also lives on Guam, added he believes "a lot of people have no confidence that the White House will do the right thing under the circumstances."

However, the brothers say they haven't seen anyone panicking or stocking up on supplies.

"I think people are just stunned and really don't know what to think," Todd Thompson said.

Guam is about 2,100 miles (3,380 kilometers) southeast of Pyongyang and 3,800 miles (6,115 kilometers) west of Honolulu in the Pacific Ocean. For years, North Korea has claimed Guam is within its missiles' striking distance, making furious statements each time when the U.S. flew powerful bombers from the island's air base to the Korean Peninsula.

In August last year, the North's Foreign Ministry warned that all U.S. military bases in the Pacific including Guam would "face ruin in the face of all-out and substantial attack" by the North's military. In the spring of 2013, state media cited leader Kim Jong Un as having ordered his military to prepare plans on launching strikes on U.S. military bases in Guam, Hawaii and South Korea as well as the American mainland.

Guam is armed with the U.S. Army's defense system known as Terminal High Altitude Area Defense, or THAAD, which can intercept missiles.

Similar threats in 2013 led Guam's U.S. Congresswoman Madeleine Z. Bordallo to advocate for the THAAD system, she said in a statement Wednesday.

"North Korea's most recent threat to target Guam is dangerous and it further heightens tensions in our region," Bordallo said. "While we have heard threats like this in the past, I take them very seriously."

"An attack or threat to Guam is a threat or attack on the United States," said Guam Gov. Eddie Calvo, who said he spoke with White House officials Monday morning. "They have said that America will be defended."

A travel agent on Guam said they haven't had a surge of customers seeking to book flights off the island.

"It's not bad at all, no chaos," said Mariah Sablan, who works for Golden Dragon Travel Inc. "It's just like a regular business day."