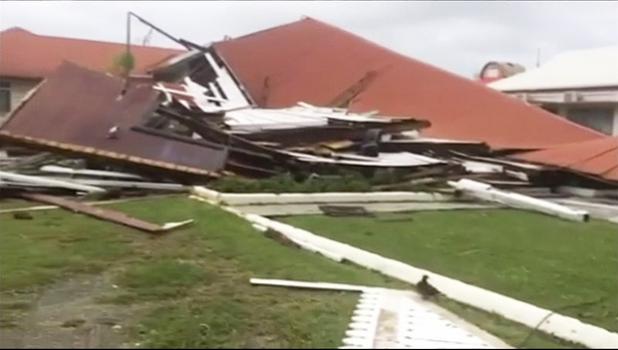 WELLINGTON, New Zealand (AP) — The Pacific nation of Tonga began cleaning up damage Tuesday from a cyclone that destroyed its Parliament House, as well as homes and churches, and was intensifying as it headed toward nearby Fiji.

Cyclone Gita caused power outages after tearing through the island nation just south of the capital, Nuku’alofa, with winds exceeding 200 kilometers per hour (124 miles per hour) at landfall. Some 5,000 people stayed in evacuation centers overnight, according to officials, and an emergency was declared. There were no immediate reports of serious injuries or deaths.

The cyclone was intensifying and was forecast to hit some southern Fiji islands Tuesday night, though it’s likely to miss Fiji’s major population centers, including the capital, Suva.

In Tonga, publisher Pesi Fonua said fallen trees were littering the landscape and their absence was opening up new vistas. He said many homes had lost their roofs or were otherwise badly damaged. Many people had endured a terrifying night and were glad to be alive, he added.

“Most of them haven’t experienced anything like this before,” he said. “It was a real shock for them.”

Tongan noble lawmaker Lord Fusitu’a told the Australian Broadcasting Corp. it was a great disappointment the Parliament building had been knocked down.

“Successive legislatures over the years have suggested building a new Parliament House, and I guess that’ll be a necessity now,” he said.

About 2,500 people living on two of Fiji’s islands were at risk, the nation’s National Disaster Management Office told Radio New Zealand. Director Anare Leweniqila said emergency supplies of food and water were being gathered and urged elderly and disabled people to begin moving into evacuation centers.

The storm has strengthened since hitting Samoa and American Samoa last week, where it caused damage to buildings, widespread power outages and flooding.

President Donald Trump on Sunday declared an emergency in American Samoa, a U.S. territory. The declaration allows the Federal Emergency Management Agency to provide equipment and resources to help the 50,000 residents recover.

Chris Brandolino, a scientist at New Zealand’s National Institute of Water and Atmospheric Research, said flooding and coastal inundation would likely cause as many problems in Tonga as the damage from the winds.

Both Australia and New Zealand are sending humanitarian supplies to Tonga, including emergency shelters, cooking equipment and hygiene kits.