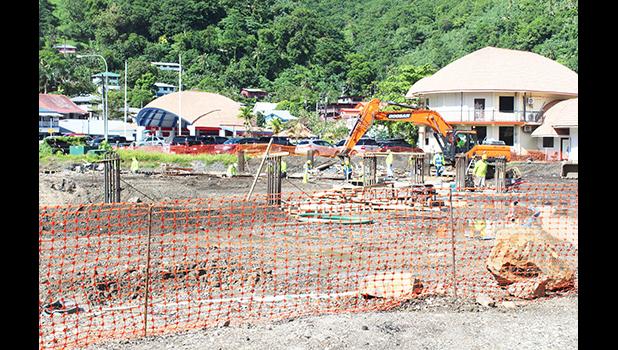 Pago Pago, AMERICAN SAMOA — The Senate Government Operations Committee, chaired by Sen. Togiola T.A. Tulafono has been tasked with communicating with the Department of Public Works to find out the status of the new Fono building — as seen in this Samoa News photo taken Wednesday this week.

Status of the new Fono building was raised by Senate President Tuaolo Manaia Fruean during last Friday’s Senate session saying the building is just the structure itself with no offices for lawmakers and this caught some senators by surprise.

Togiola said that in accordance with the responsibilities of his committee, a letter was being prepared for submission to DPW seeking the most recent complete status report of the Fono building project.

He informed senators that information being sought includes funding, funding source, where the project stands, when it’s to be completed and any leftover funds, and if there are sufficient funds to complete the project.

He said the work of the committee is to provide a clear and complete picture of this project.

An ASG official told Samoa News that the Senate committee is also requesting from DPW copies of the original architectural drawing of the project, copy of any change orders, original cost of the project based on the engineer’s cost estimate, and a copy of signed agreement with the contractor (which is Paramount Builders).

Furthermore, the committee seeks confirmation that the project does not include offices for lawmakers and if that is the case, who made the decision not to include offices and is there space at the building site to build offices.

As previously reported by Samoa News, construction of the multimillion dollar Fono building has been on hold since late 2018, following concerns raised by the US Federal Emergency Management Agency (FEMA) that the structure is being built in a flood zone (VE Zone) and that “all new construction in this flood zone must be built using post and pier construction to elevate the lowest floor Base Floor Elevation (BFE), with no obstructions under the building.”

When the project broke ground, then Gov. Lolo Matalasi Moliga publicly stated that the project does not include offices for lawmakers and he will be looking for funding to address offices. Lolo repeated this statement several times through last year.