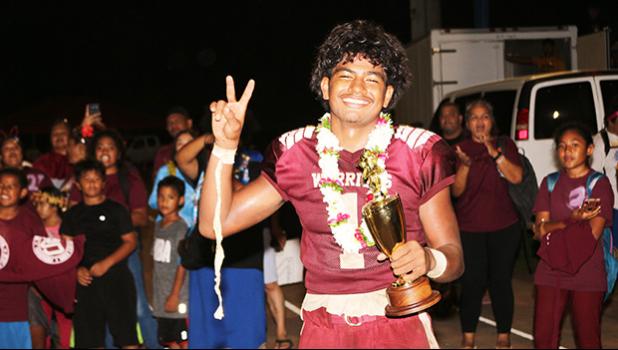 Pago Pago, AMERICAN SAMOA — Last Friday evening at the Veterans Memorial Stadium, both sides of the field were filled with fans, supporters and student bodies of both Fa’asao Marist High School and Tafuna High School, as they came out to witness yet another historical event in the territory, as this year's Junior Varsity Football Championship Game, was surely a game for the books.

Coverage of ASHSAA Football is proudly sponsored and brought to you by I’aulualo and Tapa’au 2020 ‘Together We Can’.

Head Coach Kevin Magalei and the Warrior Nation were excited when they finally sealed the deal for this year's season with a 16 - 6 victory – But it didn’t come easy.

The first three quarters of the match was scoreless, as both defensive units did not let up and fought their best to defend their territories, a fight that would test both defensive sides of the ball until the final quarter of play.

It was the Warriors who drew first blood in the final quarter of the game, and led the match with an 8 point lead.

Not too long after that, the Crusaders responded with their first touchdown of the game, but it still wasn’t enough to get ahead when their two point conversion was denied.

With just a few minutes to closure, Tafuna hammered the nail in the coffin and sealed the deal with their last end zone appearance of the season that concluded this match in favor of the Warriors with a 16 - 6 victory.

Tafuna was named 2020- 2021 ASHSAA’s JV Champions and were awarded their trophy following the match. Tafuna’s JV Program remains undefeated and has been over the past 2 years. This year marks the third year of their undefeated streak.

Two Marist Crusader defenders bringing down Tafuna’s ball carrier in the back field for a loss during the opening half of their Junior Varsity Championship Game this past Friday evening at the Veterans Memorial Stadium – Tafuna won 16 - 6. [photo: Tony Gasu]

Marist Crusaders ball carrier hurdles over Tafuna’s Tupou during the third quarter of their junior varsity championship game last Friday evening at the Veterans Memorial Stadium. Although Marist suffered a heart breaking 16 - 6 loss in the title game, the Crusaders made history as a team who’s come back into the league and in their first year back, they climbed the ladder and made it to the championship game of the season. [photo: Tony Gasu]