“When is the wind going to come?” — A Sailing Story 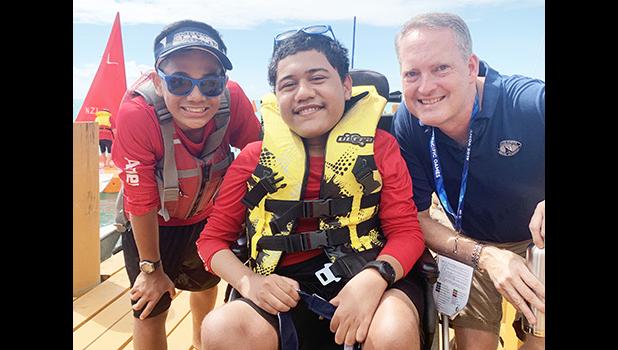 By
Sandra King-Young
Special feature from the 16th Pacific Games.

Mulifanua, SAMOA— When is the wind going to come, is the question asked by Alofaeleuma Faualo, who has become an inspirational athlete at the 16th Pacific Games.

That’s because Alofa, the athlete, has a disability not ever seen at the Pacific Games. He is sailing for the American Samoa Sailing Team as a Paraplegic Sailor in the Hansa 303. In spite of his severe disability, his spirit has uplifted those around him with genuine courage, strength and joy.

Alofa has Spinal Muscular Atrophy (SMA) a degenerative disease of the spinal cord that robs people of physical strength — eventually taking away the ability to walk, eat and breathe. Alofa’s mother, Meli Faualo, said that Alofa manifested symptoms of SMA at the age of 2 years and at 3 years old, he became crippled. At the age of 5 he could no longer walk. He received his first wheelchair at the age of 7. He lost the use of his arms at 12. He has two older siblings that died from SMA and another younger sister with SMA. Alofa is one of eight children in a low income family with only one income earner.

But on this day, Alofa is only focused on feeling the wind. He just wants to be free on the water and feel the sun and wind on his face. The postponement flag is lowered. Alofa excitedly says, “The wind has arrived and the Hansa flag is up!” I hear the race officials calling his name, “Alofa!” Alofa lights up, “They are calling me, WHOOOHOOO! Let’s go!” And off we go to get him in the Hansa sailboat. His excitement completely contagious.

Alofa is lowered into the Hansa using a crane on the dock and Sailability Australia and NZ officials and Samoa volunteers all help to get him into the boat. Alofa is sitting too far forward and his face is fully facing the sky. I go down to the Hansa to readjust him so he is sitting comfortably in the boat without his face looking up at the sun. Alofa cannot lift his neck, arms and legs. I must lift his arms and place them where he wants them, lift him further back in his seat and prop him up using two pillows and a make shift towel neck pillow to hold his neck from flopping forward or sideway. Once situated, they are off without another backward glance or word. Alofa’s disability is gone.

This is the first time that the Pacific Games concurrently running with the Oceania Open Sailing Championships is holding the Para-Hansa 303 races.

For one day, the young American Samoa Sailing Team of Leolemau Veleutu Young (13 yrs), Carlos Leonel Afoafouvale Sanchez (13 yrs) and Carneal Ali’ioleao Lili’o Satele (11 yrs) learned how to sail the Hansa, while Yasminna Sanchez, the only female sailor on the team is in the midst of her Laser Radial races.

The original doubles team of Alofa and Leo had a change in crew due to illness and our youngest sailor, 11-year old Carneal became the crew for Alofa. So long as Alofa does the steering or something significant in operating the Hansa, he is qualified to race. Alofa prefers to say he is “driving” the boat instead of “steering.” Alofa and his teammates have had random sessions talking sailing strategy for Alofa’s race days including the use of pillows.

Alofa’s unlikely journey to the Pacific Games was fraught with obstacles.

When Secretary General of the Oceania Sailing Federation (OSAF), John Tierney, reached out to me about entering a Para-Sailor in the Hansa category, I did not even think we would be able to get one in so short a time. So, Christinna Lutu-Sanchez who has a younger brother with special needs, reached out to DOE SPED. I personally visited Tafuna High School to meet our three paraplegic students and to let them know about the para-hansa opportunity. They were skeptical.

Alofa would later say, “I thought this would be such a great adventure, if it was real.”

After meeting Alofa, Ala and Martin, I knew it was up to us, the newly-re-established Pago Pago Yacht Club and the national sailing federation to make this adventure happen. Eventually, Alofa ended up as the final candidate for para-sailing.

Since Alofa had never travelled out of American Samoa, he had no travel documents. I arranged for the Dial-a-Ride program to take Alofa to get his photos and CI done. More importantly I had to convince his mother Meli, that he could do this — that she could do this. Four times over 6 weeks she said no for one reason or another, four times I convinced her all her fears could be overcome.

With approval from Governor Lolo Matalasi Moliga and Lt. Governor Lemanu Palepoi Sialega Mauga and the hard work of Port Director Tamaleilagi Claire Poumele, the Manu’atele was made available to transport half of our sailing and support team to Samoa (as well as other sports federations).

Even though we were not provided a handi-van in Samoa to transport Alofa, we made do. At one point, we used only a truck to transport 10 of our sailing team everywhere — with one person sitting in Alofa’s wheelchair in the truck bed — his wheelchair cannot be folded.

We always found a way to get Alofa and our young sailing team to our home base at Faleula Athletes Village or our sailing venue in Mulifanua. Our van driver Mike Anapu from Sa’anapu, even helps carry Alofa from van to house to wheelchair — way beyond his scope of work. Alofa has not once complained with the inadequate ground transportation, we did all the complaining for him. He only responds with a heart melting smile that makes you feel so small and selfish with all our complaints.

Alofa and his crew mate Carneal are now just a blue dot on the horizon. I realize as I sit on the shore under the tree that we have dubbed the American Samoa tree, this is Alofa’s first trip out of AS and will probably be his last. His mother with her quiet dignity looks out to sea and even though she cannot see Alofa, she can follow the little blue dot amongst the rainbow dots. I see the love and resolve of a mother who is treasuring this moment for her son who lives on borrowed time.

At times she gets choked up. Never in a million years did she ever think that Alofa would ride on the Manu’atele, lead the AS delegation march at the opening ceremonies of the Pacific Games and sail out to sea steering a blue Hansa sailboat.

When Alofa was on the Manu’atele, he said, “I will never forget this experience in my life. This is my great adventure!” Unbeknownst to him, this became our adventure, learning to care and advocate for him as a person with a severe physical disability to ensure his inclusion in sailing.

Sailing is one of the few sports although expensive, is heavily invested in the promotion of inclusion in the sport and has a strong program for para-sailing — for people with mental or physical disability. Unique in sailing competitions, is the inclusion of para-sailing in mainstream competitions like the Pacific Games and Oceania Open Championships.