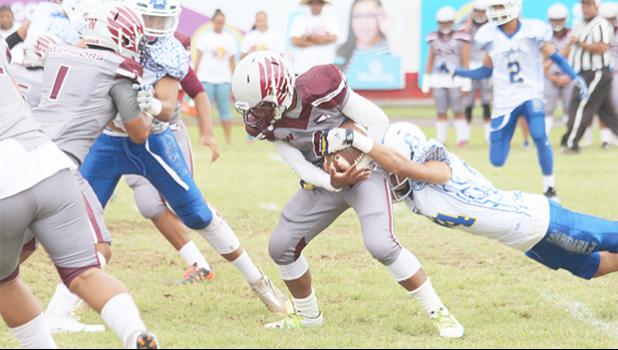 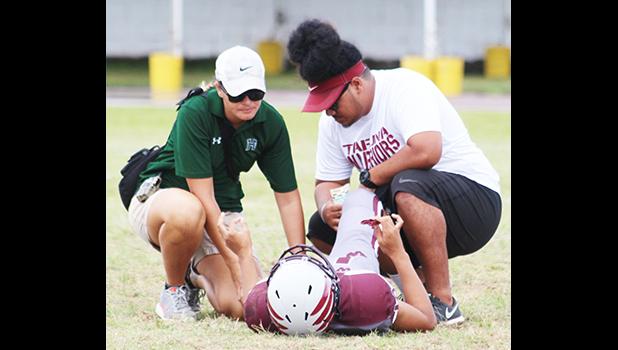 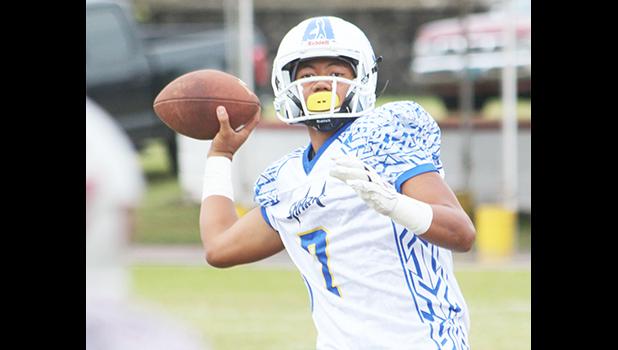 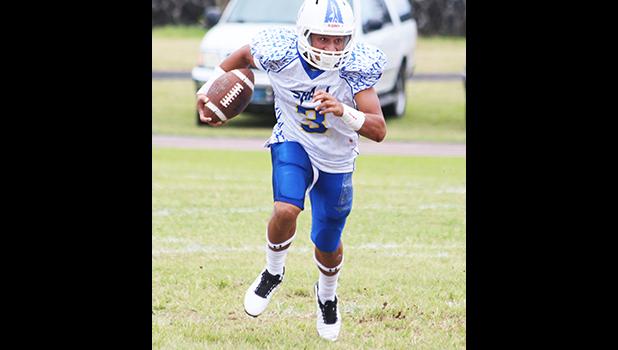 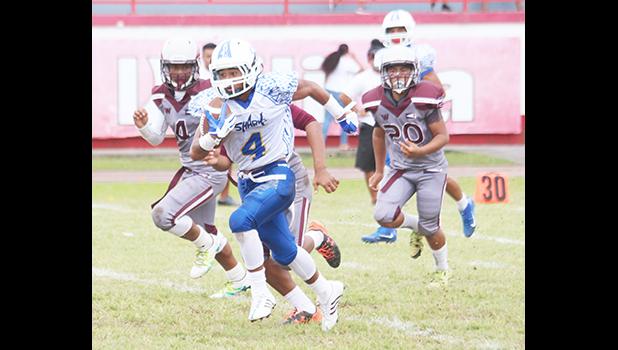 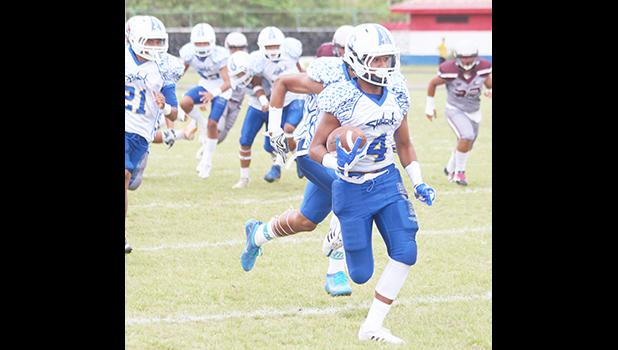 Tafuna is now the only undefeated team in Varsity competition 3-0-0
By
Tony Gasu
tony@samoanews.com

Last Saturday, the American Samoa High School Athletics Association (ASHSAA) kicked off week 3 of high school football at the Veterans Memorial Stadium – fielding one of the long awaited battles between the Sharks and the Warriors, where Tafuna’s defensive coordinator Kevin Magalei and the Warriors defense, destroyed Samoana’s offense in a 48-21 victory in the varsity division.

Coverage of the 2017- 18 ASHSAA football season is sponsored by Congresswoman Aumua Amata.

However, in the junior varsity division game between Samoana and Tafuna, the Sharks just dominated the Warriors with their ‘air-attack’ – led by offensive coordinator Keith from all corners of the field.

Samoa News would like to point out that Samoana High School’s first win this season was disqualified by ASHSAA, after the team failed to turn in their physical testing (PT) documents from the Department of Health, an annual procedure that all teams have to go through before the season.

Upon receiving the opening kick-off of the game, Tafuna opened up the match by shooting themselves in the foot with penalties.

The Sharks didn’t have to lift a finger in the Warriors 20-yard loss that opened the game.

Shortly, after head coach Kolose Ili regrouped his team in a time out, Tafuna returned firing, as Tala Sufia sent Fetu Gaoa up the middle for the opening touchdown of the game. A two-point conversion to Panapa Filoiali’i was stopped immediately in the backfield by Solomona Seiuli of the Sharks, but nonetheless Tafuna took the early six-point lead.

3:42 still in the first quarter, and Tafuna’s second down on Samoana’s 30-yard line, and Sufia hooks up with Pene Fa’avae again – in the air this time on a 30-yard pass attempt that scored six more points for the Warriors.

To open up the second quarter, Tafuna’s passing game escalated dangerously for Samoana’s defense, as they could barely keep up with the Warriors' option game – utilizing a balanced attack of Run-N-Gun strategy that opened another opportunity to the end zone.

Warriors' first down inside Samoana’s red zone, and Sufia on a quarterback keeper managed to punch one in for six.

After a whole quarter of being tortured by Elton Titania and Tafuna’s defensive front, Samoana finally solved the mystery on how to overcome Tafuna’s defensive pressure. After a long run from David Mikaele, setting up the Sharks inside the Warriors' 10-yard line, Anthony Feala fired a laser to Zephaniah Pati for their first touchdown of the game.

The field goal conversion by Elliot Lelei was good enough to bring them back to life and trail the Warriors 7-18 with just 8:32 remaining in the opening half of the game.

Then, with just 24 seconds remaining in the first half, Sufia fired a long one to the corner of the end zone. It was caught by Pulenu’u Fono for another Tafuna touchdown extending their lead to 24-7 heading into half time.

To open up the second half of play, Louis Malala Jr. steamed through Tafuna’s defensive unit, as he punched in Samoana’s second touchdown of the game, a 10-yard reception that came after a long run by David Mikaele at 8:57 into the third quarter.

Just when the Sharks thought they’d finally had things going, Pene Fa’avae of the Warriors watered their flame of hope out after he scored another touchdown for the Warriors, extending Tafuna’s lead to 30-13.

With1:36 remaining in the third, and Sufia leading Tafuna from Samoana’s 22-yard line, THS Gaoa is sent up the middle for his second touchdown of the game.

Samoana’s offensive unit, desperately trying to revive themselves, are able to with just a minute remaining in the third, when Feala finds Louis Malala Jr. from the Warriors' 25-yard line – a pass reception that was good for Samoana’s third touchdown of the game. Their two-point conversion in the hands of Pulefano Misitana was good enough to bring them back to trail the Warriors 21-36.

With 3:41 remaining in the ball game, and Sufia’s passing rate passing the sixth star marker, he threads another laser through the heart of Samoana’s defensive unit into the hands of Pene Fa’avae – a 15 yard pass reception for another Tafuna touchdown.The Sharks thought the storm was over, but Sufia turned the heat up until the fat lady sang.

With 5:20 remaining in the ball game, Sufia fired a 50-yard bomber to Fono for another Tafuna touchdown — their final touchdown of the game as the Warriors continue down the regular season with an unbeatable record after a 48-21 victory.

Samoana’s offensive unit led by Junior ‘Jam’ Tanielu didn’t take long to get on the board in their first meeting against Tafuna, after the opening kick-off of the game was returned by Kobe Lefiti all the way back to Tafuna’s 5-yard line.

Junior Tanielu immediately turned to the sidelines to fire a screen receiver pass to Pito Amani for their first touchdown of the game. Their two-point conversion was a play action pass out to Lefiti that secured the Sharks' early 8-point lead.

Early in the second quarter, with 9:25 remaining in the first half, Tanielu’s passing performance starts to escalate to an unstoppable rhythm. During Samoana’s first down from midfield, Tanielu fired a bullet to Lefiti again, who caught the pass en-route and took it all the way downfield for a 55-yard touchdown reception.

The two-point conversion in the hands of Paul Fano was good enough to put them ahead 16- 0.

At 3:49 remaining in the second, Samoana was still unfolding their ‘air-attack’, which caught the Warriors sleeping again during a second and goal situation, a quick slant pass from Tanielu to Avery Seumanutafa extended the Sharks lead with another touchdown.

Just when the Sharks thought they had everything under control, Warriors quarterback Francisco Mauigoa managed to bomb one in the air to his brother Pa’apa’a Mauigoa for Tafuna’s opening touchdown of the game from midfield – a 44-yard pass reception between the Mauigoas for six with just 1:43 remaining in the half.

The two-point conversion, a quarterback keeper by Mauigoa was good enough to bring them back to trail the Sharks 8-24.

Sharks third down on Tafuna’s 33-yard line, a quarterback keeper by Tanielu, extended Samoana’s lead. Fano of Samoana with his third successful two-point conversion, put the Sharks ahead 32-8.

Not too long after that, with 4:39 remaining in the ball game, Tanielu fired a 47-yard touchdown pass to Samson Leulu for another Samoana touchdown.

Just when Tafuna’s hopes of recovering were in sight, Samoana turned their lights out at the kick-off after the touchdown – when Samoana recovered their own kick-off on Tafuna’s 22-yard line, and it was another shot towards the goal line for Tanielu and his Sharkies.

Samoana’s first down inside Warrior territory, and Tanielu fires a long one to Jon-Jon Uga’itafa for another Samoana touchdown, as they extend their lead to 46-8 after the two-point conversion by Tanielu on a quarterback keep, to claim their first win of the season.